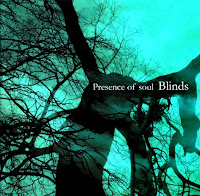 Japanese group PRESENCE OF SOUL is led by female singer and composer YUKI, who also handles guitars, keyboards and Mellotron. She's accompanied by a guitar player, a bass player and a drummer.
"Blinds" (2008) is a first album to be listened to somewhere between GODSPEED YOU BLACK EMPEROR !, SIGUR ROS, MOGWAI and ANEKDOTEN. As a matter of fact, the band was the support act for the swedish musicians during their 2008 shows in Japan.
From the very beginning, PRESENCE OF SOUL proves to be absolutely innovative and mature at the same time: ethereal female vocals create a sharp contrast with guitars fury and drumming power. Sad atmospheres, often enhanced by Mellotron and a great sense of slowliness (Without mentioning softness) evolve step by step, with an increasing violence, reaching its climax in an overwhelming maelstrom. It's a kind of "Progressive post-rock", and one cannot imagine a more intense musical world. You'll surely be haunted a long time after listening...

Same problem here, with track number 4, the rest is ok.