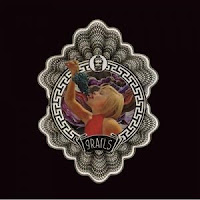 Now ass-deep in the new millennium, and “post-rock” has long since become the dirty word it always should have been. All well and good, mind you, save for the fact that it gets consistently trotted out for any rock-based band that decides to approach the dais sans vocals. There’s hardly anything to be said for the hollow art of the guitar-gasm at this point, and what worth may have been left in the genre died on a fictional football field in Texas sometime in 2007.

Portland’s Grails, however, wisely eschew such limp tendencies, favoring not the voiceless, dead-faced riff that supposed contemporaries in the “post-rock” field work until all meaning is stripped away, but instead a global, wide-angle take on psychedelic rock and improv. Since undergoing some major line-up shifts a few years back, it’s an approach they’ve worked like a charm twice before, both on Black Tar Prophecies, a series of off-the-cuff EPs, and Burning Off Impurities, their largely successful 2007 re-imagining of Turkish psych, blues-based Brit folk, and even a few subtle hints of Japanese-styled guitar malevolence.

When touring on this material Grails augmented their traditional four-piece line-up with drummer Ben Nugent, giving regular percussionist Emil Amos license to step to the front on guitar. Once off the road, the newly expanded group cut the five-song Take Refuge in Clean Living to document this latest chapter in their continued evolution. Though still walking much the same path that their two previous records did, this latest batch of tunes revels in a deeper expressiveness, one undoubtedly fostered by Amos’ non-drum contributions.

Coming in on the same high notes that carried their 2007 full-length, Grails open their latest with “Stoned at the Taj Again,” a lengthy composition that matches intricate guitar lines with delicate saz figures, building all the while to an ominous, percussive onslaught wrought with creeping dread. “PTSD” continues the strain, both in title and overall tonal sentiment, allowing gentle strums to take the lead, only to have them hit with the constant threat of capsize by a steadily encroaching wave of feedback and far-off tape manipulation.

Most surprising here, however, is “11th Hour.” Originally done in fine kitsch by the Ventures, Grails’ version retains only trace echoes, pulling the leads apart and muting the percussion until grim latticework of guitar remains. Better still is “Take Refuge,” a track that takes the group’s Turkish fascinations and blends in a flavor of Morricone, pairing a wheezing organ with spaghetti western guitars for a slow burn that gracefully fades into the distance, beginning the sweet finale of what is easily Grails’ third masterful record in an equally impressive run.-Michael Crumsho (dustedmagazine.com)