Meniscus - Absence Of I 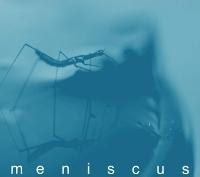 Artist: Meniscus
Album: Absence Of I
Label: Self Released
Year: 2007

Meniscus climbing insects rely on the surface tension of water to propel themselves without the use of appendages. Manipulating the surface to create movement, these insects can journey the daunting waterscape.....

Now, while this sounds decidedly pretentious (truth be told, it kind of is) my real fear is that trying to base an album on something as mysterious as an insects' unfathomable ability to convert their own muscular strain to surface energy to climb water would be a tad challenging. Not only for them (though I do worry about the bands well being, the nice guy that I am), but also for me to decipher and competently write about. Turns out that although the concept is, and has apparently always been at the forefront of their minds (the blurb at the top is from their own website), it doesn’t have to play a major part in the listening experience.

You may well let out a large sigh of relief at this last statement, but if I were you I would hold that breath for whatever release of theirs comes next, as you’ll be waiting for it not-so-patiently after hearing this EP. Absence Of I Is the debut release from Sydney three-piece Meniscus, and it’s very good indeed. In fact, very good doesn’t quite sum this up, it’s amazing.

Opener "Cusp" begins with a very typical post-rock style delayed/panned guitar riff with some reversed hums thrown in there, but any signs of typical song craft end there. After only 35 seconds, a crushing downtuned guitar kicks in, and almost instantly reveals the true musicianship of all three members of the band (that’s right, three). The same theme established at the start of the piece is continued throughout and beautifully varied so as to not bore the listener, but rather to string the songs together. The insect metaphor is not quite so noticeable, aside from a few samples of humming and buzzing thrown in to the mix but serves to enhance the experience, should you decide to bear it in mind.

As the collection continues, it becomes the drums that stand out more than anything at certain points (second track, "Pilot" for example) for the sheer urgency and drive they add to a very ordinary guitar riff. It is this contrast that makes Absence Of I so continually interesting, and strays away from the pit of bore that can come from music that is either over-complicated or sleep-inducingly simple. When one element steps up the pace, another element becomes less ornate, leaving room for all the instruments to move and develop without dazzling the listener with a wall of jagged sound.

A whole host of potential influences could be present here (apart from the ‘heat, light, season and moisture...’ they so eloquently state on their myspace) depending on which part you listen to. While it is in essence, post-metal themed, it encompasses a huge variety of styles, from fellow Oceanians Jakob to Los Angeles' Isis, to prog-rock classics like King Crimson via the Deftones, and as much as I hate to pepper my reviews with band names, it made me think of all four of those bands and countless more. How then has this EP ended up so good?

The only evident albeit minor downfall I see with this release is that by encompassing all these aspects, combined with the rather contrived metaphor that Meniscus themselves seem to wholeheartedly endorse, things get a bit too complicated. By this I don’t even mean the music itself, but rather the alleged journey of the insect from water to surface. Near the end of the album, there seems to be a mix of insect noises, interspersed with active sections, then distortion. Are we to guess from this that maybe the journeying insect fails a bit and starts flailing around in a rage, causing some crushing metal to commence? Or that during the last track, the insect in question has a bit of a sit down, before continuing to bend the laws of fluids. During the 22 minute "Idiot Savant," there is an 8 minute ‘gap’ consisting of nothing but chirping, before what appears to be a more ambient reprise of an earlier section. There is a way to justify this i’m sure, but after many, many listens, it’s not immediately clear. Like I said, it’s not a major gripe.

It may have taken them three years, but Meniscus have come up with a winner: a staggeringly confident and competent debut release that shows a sort of compositional maturity that many bands on their fifth release would strive to achieve. Beautifully crafted and impeccably conceived, this had better be a sign of what’s yet to come. -Barry Smethurst (thesilentballet.com)