Joy Wants Eternity - You Who Pretend To Sleep 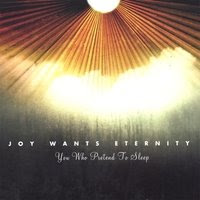 
Joy Wants Eternity is a 5 piece band based out of Seattle, Washington that by sifting through materials online would lead you to believe that they are another instrumental post-rock band. Honestly that’s what I figured it would be when I initially checked out the group’s page on MySpace, but I was pleasantly surprised to hear what began to play as soon as it loaded. The song, which was “Existences Rust” from their upcoming debut album You Who Pretend to Sleep, sparked the thought in my head that if I were to be in a band like that, then this is what I would want to sound like. So I was thrilled to find the actual album show up in my mailbox this past Friday and it has proved to be every bit as good as my first impression of them led me to believe.

Comparisons to fellow post-rockers like Mogwai, Mono, and etc. are sure to be pinned on these guys. It’s obvious that there are parts of You Who Pretend to Sleep that draw from these bands, but I found myself being taken in by the amount of warm feedback and the almost full scale ambient direction they tend to take the music at times. I would consider this album to be more motivated by past shoegaze acts than anything else. The crashes of slow melting feedback are quick to remind me of either Slowdive or Flying Saucer Attack, especially the more ambient and spaced out tracks like “Death is a Door That Opens” and “What Lies Behind”. To me, this is where they really excel, in creating such warm and lush sounds that will do more than get your blood pumping for a few mere minutes. Joy Wants Eternity has created an exceptionally beautiful and powerful sounding record that will wrap itself around the listener for eight solid tracks. I can’t recommend this one enough for those that enjoy both post-rock and shoegaze; it’s a great mixture of the two that will surely please fans of either. -by Jonathan (builtonaweakspot.com)

Official site
MySpace
Buy it
Posted by JaM at 9:31 PM

You have a great music blog here! I've added you to my mp3blog list and custom search, check it out.

I've collected over 5,000 mp3blog links, accessible from the alpha menu at page top. You can open frames on these blogs to view them directly on my site, and you can also view the feeds in a frame.

You can search your blog and all the others in my custom google search:

Your blog keeps getting better and better! Your older articles are not as good as newer ones you have a lot more creativity and originality now. Keep it up!
And according to this article, I totally agree with your opinion, but only this time! :)