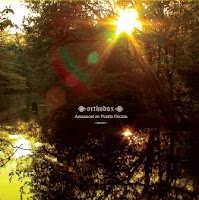 
Orthodox is a drone/doom band hailing from Spain. Their 2006 release Gran Poder was a throbbing, droning juggernaut of a doom album that was more than reminiscent of Teeth of Lions Rule the Divine's Rampton album mixed with YOB's heaviest moments. On Amanecer En Puerta Oscura, Orthodox drops the pulsating doom of Gran Poder in favor of a more striking blend of styles and instrumentation. This makes Amanecer... a thoroughly entertaining listen that has as much to offer as anything essential released in this somewhat saturated genre.

The first thing to note, and to the detriment of the album in some ways, is the album cover's likeness to Earth. This is made even more apparent on the first track, "Con Sangre De Quien Te Ofenda", as it has droning clean guitars and some dissonant out of tune horns (I'm guessing a trumpet and possibly a saxophone). The drums are not as "reverbed" as they were on Gran Poder and the upright bass cuts right through the mix while the overall mix maintains all resonance and warmth without sounding over-produced.

Yet what makes Amanecer... such an entertaining album is the distinctly different vibe on each song. "Mesto, Rigido E Cermoniale" has a Pelican vibe and "Solemne Triduo" is a stock doom/stoner song but is the only song on the album that has vocals. Meanwhile, the 15 minute "Templos" is a very blatant hats off to 70's prog and would not be out of place on any 70s era King Crimson or Emerson, Lake, and Palmer albums. The song isn't especially technical or jammy but the noises and atmospheric drone present are so Crimson it hurts. Listen to Crimson's Lark's Tongue in Aspic sometime if you find it too hard to believe.

The instruments on this album are especially eclectic. Mouth harp, horns, pianos, organs, nylon string guitars, and I'm sure something else is buried in the mix. The bandmembers themselves are of the highest caliber for this type of music and they make their presence known. Moreso here than on Gran Poder.

Overall, if you like Pelican, Neurosis, SunnO))), Isis, Earth etc. then there's really nothing holding you back from enjoying Orthodox. What the band lacks, seemingly, in originality, they more than make up for in genuine musical enthusiasm as this album will take you on a solid 48 minute trip through why this genre continues to deliver the occasional homerun (which Amanecer... is). If I would have gotten to this album sooner it would have likely cracked my top ten for 2007. Highly recommended and thoroughly intriguing release. Mix with THC for optimal results. (metalreview.com)

Official site
MySpace
Buy it
Posted by JaM at 9:07 PM

I found your blog for an accident and is a great pleasure for me to 'suffer this accident'. ah, one little thing, the record name is 'Amanecer en puerta oscura'.

congratulations and i love Hydrahead too!!!