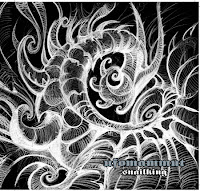 The slow crescendo introducing "Blotch," the first track from Ufomammut's Snailking LP, is the sound of the monolith in 2001: A Space Odyssey slowly climbing over the horizon of a forbidden planet. They then use the song's terrifying climax a few minutes later to unleash the alien invasion itself! No sh*t, with their bone-crushing fusion of sludge metal, space rock, and death/doom, Ufomammut may just represent the long-awaited next evolutionary step beyond the works of desert/space metal pioneers Kyuss, left unfinished almost ten years earlier. If not quite worthy of such a daring claim yet, there's certainly a sense of that legacy's continuation here, as the Italian quartet proves itself equally adept at treading antediluvian landscapes as launching into deep-space excursions, the band's epic songs regularly exploring the massive swath of sound stretched between the two extremes. To wit, second track "Hopscotch" comes armed to the teeth with weapons of stone-age warfare -- tortured grunts, earthshaking guitars, rumbling bass, and pounding drums of doom -- and third cut "Lacrimosa" reverts the polarity into dreamy, hauntingly beautiful intergalactic hibernation chamber music, where Pink Floyd are the most obvious touchstone. Later on, "Odio" and "God" both sound like "sons of Kyuss," yet equally reminiscent of English doom gods Electric Wizard during their spacier moments. The same could be said for the creepy "Braindome," which supplies the perfect soundtrack for being swallowed by a black hole, and the closing, 28-minute song collage "Demontain" recalls Monster Magnet's psych-space freak-out Tab...25 for sheer ungodly girth and meandering focus. No, it's not entirely original, but Snailking is still a monstrous achievement in the space doom field.

Email ThisBlogThis!Share to TwitterShare to FacebookShare to Pinterest
Labels: EXPERIMENTAL