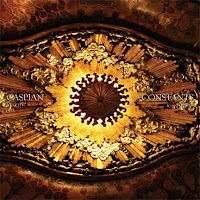 As my live review of Caspian and Constants attests, I’m in awe of these nonpareil post-rock outfits that hail from Massachusetts. Part of what made the show I attended so special was the chance to experience music from the band’s respective upcoming full-lengths in its inchoate yet thrilling stages.

To whet the proverbial appetite for tuneage from two of post-rock’s most exciting acts, Radar Recordings — the label co-owned by Constants frontman Will Benoit — released a 7’’ split containing one track from each band’s forthcoming release. Both tracks are bangers in no need of mash, the effort from Caspian particularly engaging because the band’s decision to “just let it rip and let it stay as dirty as possible.” Constants’ contribution marks their first recording with new drummer Rob Motes (ex Coma Recovery); replacing the off-kilter creativity and power of Ducan Rich being no easy task.

Caspian’s “La Cerva” commences the record, and despite the portentous aura of its initial tremolo, the listener doesn’t anticipate the track’s trajectory… or the way, unlike most post-rock staples, this number belies a trajectory by just going about its business, grooving, ripping, kickin’ ass; it’s like an extended version of You Are the Conductor’s opener “Quovis.” After some research, I’m still unsure what “cerva” means, but the mood of the song is definitely marine, and the consistent pace conveys the sensation of being bobbed amongst and by billows, spume enlacing the eyes and ears. Despite the minor key befitting the setting, there’s also a sense of jubilation at the freedom exuded by the track; the autonomy of submission perhaps to the sea’s command and the need to jettison the mandates of post-rock and just… rock.

Beginning predictably beautifully enough with production from Will Benoit, Constants’ “…Passage” is also interesting in the way it departs slightly from the post/space-rock the band purveys: when Jon Hassel's vocals enter, one is somehow reminded of Layne Staley. Musically Constants has always echoed the lumbering, exhausted feel of Isis, while managing to conjoin this to the dexterity of Maserati and on The Murder of Tom Fitzgerril Benoit’s singing was analogous to Aaron Turner’s buried screams on Panopticon. Here, however, Hassel's delivery has more of a presence, and, while a bit unexpected, it certainly is a welcome change. So now that Layne Staley has returned from the dead to supplant Turner, we have quite the amazing composition: the track is easily the most canorous of the band’s career and the main instrumental theme has to be heard to believe. Towards the end of the second verse when aforesaid theme concludes, there’s a transition from hulking mass to transcendent thrashing that makes me go apeshit every time. Finally, following a ghostly lull, an absolutely crushing riff surfaces somehow beneath the weight of itself and bleeds the track to its last.

Bottom line: I guarantee any fan of Caspian or post-rock in general will love “La Cerva”, an excellent track that makes me hunger for more blazing Caspian. Still, it’s perhaps the subtler “…Passage” with its grunge vocals that should sway any casual fan or non record player owner — like me — into purchasing this 7’’. Not only do you get the mp3s, you can’t afford to wait for the full-lengths to experience these gems, and the artwork is gorgeous.-Stephen Chamberlain (decoymusic.com)

yepp all good source just downloaded it. there is a password for the file but it tells you in below the download