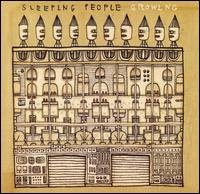 2007 might as well be the Age of Math Rock. Battles broke the seal months ago yet the shtick is already growing thin, with traditional 4/4 a thing of the past (pre-Mirrored). Leave that ordinary music to Mom and Pop, this is the New World Order, only dudes with mega-testosterone and hairy chests allowed. It is a pretty awesome lifestyle and Sleeping People want in. But even this chaotic genre needs a coherent song structure. Time signatures and complexity play out heavy-handedly throughout and unpredictability remains deliberate. In other words, the randomness is planned. So its (initially) refreshing to hear dudes play intricately without the need to show off. By keeping their hands on the wheel the album stays comprehensible, without the muddy confusion of Don Caballero.
“James Spader” kick starts Growing, after a brief “Centipede’s Dream,” with brisk drumming and simmering guitars plowing towards false crescendos with each measure then backing down into a steady groove—rinse and repeat several times. But “James Spader” isn’t a snoozer in the least and features the first great surprise of Growing: just before three minutes a glorious slice of metal heaven erupts with cyclical guitars weaving throughout urgent drums. It is a moment that personifies the Hollywood yuppie of our youth, a douchebag with feathered hair and a shit-eating grin letting us know that “This is pure cashmere and, oh right, I just cooked up one of the best guitar riffs of the year, ciao.” The rest of the track devolves into a satisfyingly hectic barrage of blastbeats and breakdowns, making up for the guilty pleasure of astral guitars. The variety of ranges make this the show-off track, from prog to math to metal. In writing, this sounds terrible, but a lack of pretense gives Sleeping People the benefit of the doubt.
Yet this is the main gripe with the album, covering up technically proficient moments with tough-guy bravado. Growing’s best moments occur when Sleeping People reach for the stars rather than playing it safe. “Yellow Guy Pink Eye” lets the drummer shine, juxtaposing a bombardment of blastbeats with light, airy guitars that ripen into hypnotic loops. “Three Things” is back to basics after the missteps of “Mouth Breeder” (which finds new levels of spiritless energy, losing all momentum from the previous tracks and devolving into a soundscape of flat ambient drone) and “Out Dream.” The guitars give the record a welcome shot of adrenaline, with guitar peaks like jackals cornering their prey before the kill. With “Three Things,” the most post-rock influenced song on Growing, shit is bound to pop off amidst the technical guitar swells. At four minutes we have liftoff and the track mushrooms into the crowning moment of Sleeping People’s career; there has to be some sort of pixie riff-making factory they visit, this is otherworldly stuff and proves loudness is not necessary to affect the listener or make a crowd perk up.
Growing’s audience divides after “Three Things.” If intricate drumming and Television synchronized guitars interest you, check out the first half of the album and stop reading here. Otherwise, the last half of Growing in a sentence: Goblin influenced ambient score with Pinback singer on vox.
Stretching themselves over several genres, Sleeping People’s cohesiveness and credibility suffers in the transition. This is intro to math rock: erratic but not chaotic, complexity rears its head in the form of tightly weaved instruments, compared to the unraveling of time signatures and symmetry.
For an album titled Growing, Sleeping People don’t make any advances in the genre—and there are so many here to pick from. Audiences looking for a cacophony of noise or instrumental freak outs will disregard Growing, casting it off as totally safe and accessible, the station wagon of math rock, which is fine; Sleeping People have released a consistently tight album with stellar moments for plenty of genre sycophant. Ultimately though, I want a band with some personality and extreme character flaws rather than none at all, or a focused precision rather than thin-stretched noodling. Sometimes I just need to hear Brian Chippendale bang on trash cans while wearing a sock over his head. -(thesilentballet.com)