Ef - Give Me Beauty Or Give Me Death 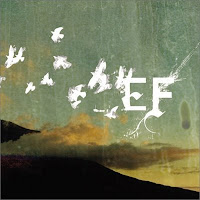 Artist: Ef
Album: Give Me Beauty Or Give Me Death
Label: And the sound
Year: 2006

This quintet hailing from Gothenbourg, Sweden, offers a soothing, atmospheric, and dense form of post-rock, comparable to bands like Mono or Yndi Halda. With six tracks clocking in at 55 minutes, this release is certainly not bad; it offers tracks which are relaxing, rhythmic, interesting, and dynamic, but ultimately, remain unmemorable. I’m not quite ready to condemn the band to death, however, as it does seem to meet its stated objective. The album does tend to grow on the listener after repeat listens, and it is a rewarding experience to come to appreciate the delicateness of these melodies, as they are quite subtle. It is a solid debut, but still nothing completely earth shattering, although I would recommend Give me Beauty... as a good album to chill out to (possibly while indulging in some stereotypical, late night, illegal inhalations.) The tones, textures, rhythms, and arrangements are not entirely original and will not leave you aching for the next opportunity to listen again. Sonically, Ef offers a pleasant mix of ambient noise, guitar tremolo, and sparkling dynamism all underlain with slow, tribal drums and strings.

Ef may be at their best when they make use of the addition of duel male/female vox, which are unfortunately used sparingly, and seem rather out of place when one considers them in context of the whole composition. The epic, 12:17 long track, "Hello Scotland", reaches several grand climaxes, but suffers from weak transitions. In the equally epic "Final Touch / Hidden Agenda", the band comes together in the perfect synergy of lulling ambience, rocking beats, gentle guitars, duel vocals, a hint of melodica, (or perhaps accordion, either way, Swedes always tend to use these instruments well) and convincing, appropriate climaxes.

I don’t intend for this to come off too negative, for there is truly a lot on this album to enjoy. It seems, however, to be representative of the kind of run-of-the-mill, mediocre output that we are presently witnessing coming out in the ‘post-rock’ genre. Although the music is listenable, and the musicians proficient, the creativity and groundbreaking originality I associate with genre defining artists (such as GY!BE, EITS, ASMZ, Mogwai, etc.) is no longer present in 90% of the albums currently coming out. As the output of bands under the umbrella of post-rock expands exponentially, the ubiquity of such mediocre releases strikes me as worrisome for a genre that is, hopefully, in its infancy.

This is a solid debut release, however, and I will look forward to the next release by Ef. I think that this band has a lot of potential, and hopefully will further explore the use of vocals, perhaps going in a direction akin to Jeniferever, using vocals less sparingly and allowing for them to become more integral parts of their compositions. I am reminded of KC Accidental or early Broken Social Scene, (although not sonically) as a group whose instrumental songs where given sorely needed direction once vocals were added. Without the cinematic intuition of acts like EITS or GY!BE to grant their instrumental tunes direction, vocals can possibly transform this mediocre outfit into something spectacular. -Joseph Sannicandro (decoymusic.com)