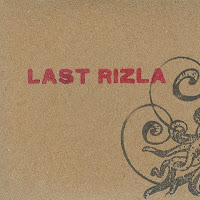 Last Rizla is a band from Hermoupolis, in Greece (on the Island of Syros, in the Cyclades Archipelago). The band started playing in 2003 and, as humorously reported on the myspace page, experienced various line-up changes. The present band’s members are: Greg (drums), Choko (guitar), Zak (vocals) and, last but not least, Kooh (bass).
The demo album was recorded in March 2009 in Thessaloniki, Greece, and was mastered and printed in Athens. It was released just a few days ago (22/10), 1000 copies (cd only) each with slightly different artwork (the band’s members hand-stamped all the packages). It is a self-financed release and the band is unsigned. The band is giving the album for free.


In his e-mail message Kooh says about the band’s musical style: “I won't cope categorizing into a genre - there's a lot of different sounds in there. Well, it's heavy.”
Variety appears to be a constant character of this nice band. Look what they say about their look on myspace!: “The vast majority of the Last Rizla Group members encounter a dispiriting problem of bad, plain bad, haircuts or hairstyles; ranging from total baldness to buddha-looking-chubby-heads, oily-lovelocks to 80s-mane-full-of-shame, disoriented-dreadlocks to yippy-yow-cowlicks, one-bread-all-head to pussy-looking-fluffy-mohawks and weak-afanaz, Last Rizla have made their statement to the world of style! Viva Bad Taste!”


After these due “technical” and “hairstyling” details, let’s move on to the music …
Well, as announced by Kooh, Last Rizla’s sound is definitely heavy and isn’t boring at all! It is truly a melting pot of styles ranging from space-psychedelic rock to fuzzy desert-stoner rock with pinches of doom, hardcore, jazz and even a hint of reggae … So it is quite difficult indeed to give a tag, although the dominant styles are space-psychedelic and heavy desert rock in pure Kyuss style.
The demo contains six tracks whose length varies between four to over nine minutes. The song structures are quite complex as you can get all these different styles into a single track. However the length is adequate to merge the styles quite well. The result is quite dynamic songs where rhythms vary markedly from the slower spacey-psych parts to the faster stoner parts. Some slow parts with strongly distorted and fuzzy guitar sounds and dark, half spoken vocal parts mark occasional “invasions” of the doom realm by this creative band.
The space-psychedelic parts may recall bands like Los Natas or White Hills, although sounds change quite a lot: in certain instances typical space rock sounds give way to parts where an almost jazzy, leading sound of bass is coupled with background reverberating guitars and occasional reggae-like rhythms.
The vocal parts are accordingly variable. Vocal parts are not dominant but just essential and vary from dark, half-spoken to minor hardcore-style shouted (somehow in background), with occasional superposition of the two vocal styles. The effect is nice.
I must say that a character I liked particularly in this excellent demo is the role of the bass. I like it a lot when the bass sound is well heard: I think it helps in giving depth to the sound. I expressed this preference of mine in other occasions (even when dealing with black metal albums …). Here the bass sound is prominent, and I dig it a lot.
And, btw, thumbs up also for the production, guys!
-by Mari @ sludgeswamp.blogspot.com

MySpace
Posted by MeTSam at 6:57 PM