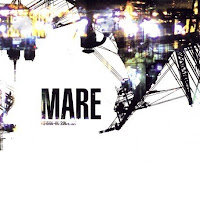 Maybe I am blinded by my love for Hydrahead Records, but it seems to me that as of late the label has been churning out spectacular album after spectacular album at a rapid rate. Whether it's the latest release from regular mainstay Harkonen or the debut release from the young phenoms of Mare, Hydrahead definitely has a knack for finding talented acts to please my ears.

Mare hail from Toronto and generate music that is the result of equal parts Isis, Godflesh, and Today is the Day. That is to say, they create music with beautiful orchestrations that show off their technical mastery as well as their comprehension of atmospheric doom. "Anisette," the album's opening track, begins in a very subdued tone: the sound of a lone guitar stripped down with no distortion. It reminded me of holding your breath before something really intense is about to happen. And that is just what happens. At the sound of the first high-hat being struck, the tuned down and distortion heavy guitars enter the formula and blend into the musical representation of trudging through a Louisiana swamp. Partnered with the dual attack of coarse screams and sweet melodies of vocalist Tyler Semrick-Palmateer, this song is a feat you must hear.

With a seamless blend, we move on to the next track, "The Sent You." In contrast to the visceral screams that dominated the opening track, Semrick-Palmateer demonstrates his versatility as a vocalist on this song. The melodies from Semrick-Palmateeare are reminiscent of Mike Patton, particularly his mannerisms on Mr. Bungle's California., This is not something you would not expect to hear out of the same man whose scream personifies the phrase "immense heartache and pain." Mare continues to execute in the niche they have carved for themselves on the next track, "Tropics." And on the album's closer, "Palaces," they succeed in every aspect that I could ever desire in a band playing this style of music. Words just won't do it justice. You really should hear it to believe it, but this is epic doom metal at its finest.

For being a demo re-packaged as an EP, Mare's self-titled debut will no doubt be praised as the surprise release of the year by many critics. But for those familiar with Semrick-Palmateer's past with The End, this album really shouldn't come as a surprise. That doesn't mean that he carries the band; the music will be the driving force that keeps this band fresh as the years go on.(-by scenepointblank.com)

Official site
MySpace
Buy it
Posted by JaM at 7:41 PM

Your blog's got some nice shit! Thanks.

Thanks for turning me on!!!!
I can totally hear the today is the day influence!!
Love your writing style!!

Is this the right pass? (lateralnoise.blogspot.com) Because it doesn't work, I can't open file.. I haven't got this problem yet (on this site).

the password doesn't work for me, is anyone else having the same issue?

File has been uploaded with correct pass by JaM!
Sorry for the inconvenience.
Please come back, thank you!

for anyone who still cant open this i figured out that the password has a space infront of it so its actually( lateralnoise.blogspot.com) without the brackets. hope that helps.

The link has been fixed!
I jut downloaded and tested it myself!
Sorry for the inconvenience and thanks for your patience!

I've been in love with this EP since it came out. I was actually scared the first time I heard it. Do you know if the members have been involved in anything since?