East Of The Wall - Farmer's Almanac 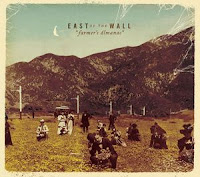 Think of your favorite hole-in-the-wall venue. Most likely you have one in mind, usually a place you have to access by way of a dirt parking lot in the rear of some dilapidated building. If you’re really lucky you know of a nearly-collapsed house or something that needed condemning years ago. Graffiti splashes the walls indiscriminately and musty sagging couches are placed randomly in case someone needs to pass out in the midst of the chaos typical of the place. This is the type of establishment where I imagine New Jersey’s East of the Wall thrives while attempting to do damage with sound waves.

Based on my experience with the band’s debut LP Farmer’s Almanac, I love to imagine the experience of seeing them live. For a band this newly established, there is no doubt a small hometown crowd of close friends and fellow rock hooligans whom they can count on to raise hell at local gigs. Elsewhere though, they’ll be booked at the type of scumbag den of iniquity described above. The beauty of these places is that everyone who shows up might not know who the band is that night, but regardless, they’re ready to throw down. Small groups of friends trickle in prepared for anything, tall boys have been ordered in advance for people after phone calls to confirm their arrival. East of the Wall sneaks equipment in through the back door, deceivingly quiet given the army of guitars they will soon unleash on the increasingly drunk crowd of rabble that has shown up that night.

The band makes very loud and very skilled instrumental noise. The immediate comparison I would make is a mix of Les Savy Fav with '90s math rock extraordinaire Faraquet. There might be some confusion here, as it’s an odd marriage. The two don’t share much in common, but they do both have a very skilled and fast paced style; the only difference (which Farmer’s Almanac very aptly picks up) is LSF’s ability to spit fire and brimstone while maintaining a catchy style. Every track on the album is simply "Track [Number]" in title, which doesn’t detract from the album’s punch somehow. East of the Wall makes a talented brand of throaty spit-and-scream metal, a fast paced rush of very talented high-speed guitars over thundering drums and a crunching baseline. I can picture the moment the lights go out and the band slaps their strings to create the album-opening wave of ambient noise, hinting at the mayhem to come.

As Track Two thunders in, the band’s intentions become clearer. The wall of sound lasts a few seconds before the Faraquet comparisons become obvious. For several tracks the band alternates epic clashes of guitars and drums with sudden changes of pace into math-rock styled guitar solos. There is no central structure, no "chorus" or "verse." The band charges through transition after transition with a method that implies madness but screams of practice and talent. At times the sound is very much like the more instrumental aspects of mid-'90s dischord bands. Several tracks into the album, the group finds its footing, trading in some of the more capable and calculating guitar/drum riffs for a more adrenaline-based ferocity. At these points I picture the crowd at any given show getting restless. They’ve heard the intro and loved the punctuated fast-paced guitar exchanges. Track Three introduces a mood shift, and with bottom-shelf tequila and that-night’s-special-beer, any below-ground venue would start seething. Even on first listen, anyone will notice that Track Three is a standout, a blister-paced and draconian-sounding mash of dark energy. This is the track with the explosive parts during which people would start to lose their shit as the drinks get caught up with the raw energy of the band. People begin hurling themselves around with eyes closed and arms flailing, beers start hitting the roof after being haphazardly thrown in a fit of emotion. East of the Wall are best suited for this exact moment, they excel at drawing out that peak-of-a-solo mood and transitioning into something even angrier rather than downshifting.

The only downside of the album is exactly what would make it great to see played live. So talented and ferocious are some of the sounds on the album that the listener sometimes feels out of place while walking along or driving down the road. This is music meant to be experienced in a drunken fit, sweat and spit flying everywhere. You want to see the two friends everyone calls Thing 1 and Thing 2 dramatically heaving their empty Mickey’s Malt Liquor ‘grenades’ at the wall as people are slammed into the stage at the feet of so much energy. You can’t replicate this in your home, however, and that’s the weakness of the album. It’s the kind of weakness East of the Wall should be proud of. - by Brendan Kraft (thesilentballet.com)