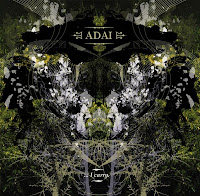 Adai is a textbook example of how to do it right in today’s tumultuous music biz. The two friends that comprise the band are hard-working, diligent, focused and, above all, they play a compelling, passionate blend of post-rock and metal. “[The band] originally was actually a four piece; two guitars, a bass, and a drummer. One of our guitarists and our bassist decided to leave,” drummer Justin Trujillo explains. “At the time we had some of our biggest shows lined up and [guitarist/vocalist Devin Mendoza and I] decided not to cancel them and instead see if we could make the two piece thing work. [W]e got a tremendous amount of positive feedback and decided to just stick with it.”

That relentless attitude is this Denver duo’s M.O. For their debut EP, …I Carry, surely they could have found a suitable studio in their native Colorado. But no, Trujillo and Mendoza weren’t going to settle for anything less than perfect, so they drove their van all the way to Massachusetts to record with one of metal’s most in-demand producers, Kurt Ballou (Converge, Cave In, Genghis Tron).

Since recording and self-releasing …I Carry in 2006-7, Adai has been hitting the road hard, touring with future labelmates Caspian, Junius, and Constants, among others. During that time, the band developed a relationship with Radar Recordings, who will be re-releasing …I Carry later this year. “We love everyone involved with [Radar] and they’re easily some of the hardest working people we’ve met in this industry,” Trujillo says.

One gets the sense that Trujillo and Mendoza are perfectionists. From working with Kurt Ballou, to tracking down Seldon Hunt (Isis) to design the sleeve for …I Carry, to choosing to continue as a duo– on their own terms– when bands with lesser mettle would have thrown in the towel prematurely; Trujillo and Mendoza clearly love what they do.

“Music for us is an emotional expression and it takes a lot for us to be satisfied with what we’re doing,” Trujillo explains. “That in itself has been the biggest struggle over the years we’ve been doing this but we couldn’t be happier with the results we’ve got so far.”- (metalmartyr.com)


Official site
MySpace
Buy it
Posted by JaM at 12:19 PM

I really like this cd, however I can not get passed how low the vocal recording is and that is the only thing that I find undesirable about this EP.

For anyone who is looking for this, it comes out on Tuesday 9/9/08