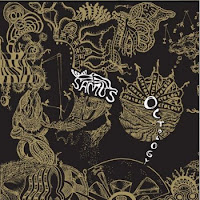 Instrumental music that doesn't bore one to death is hard to come by, especially in a world like today. There are handfuls of bands attempting the instrumental sound and failing miserably. There are others of course that do succeed in such risky endeavors. Luckily for Irepress they are one of them. Instrumental bands have a tendency to bore an audience of listeners. Nevertheless, the conventions of their songs reach another feat: they are fun to listen to.

What exactly am I talking about? Well, Irepress, if you haven't already guessed it, is an instrumental band laced with hardcore sound. All in all it's a band we would expect to hear from the influences of today. However, Irepress stand out in a way that is very important: they don't follow the rules. Their music essentially, as most hardcore bands do, incorporates a slew of breakdowns. What's makes them so unique, however, is how crafty these breakdowns actually are, which his a blessing to all of us. Their musical style is a green thumb to today's established hardcore instrumental bands.

Luckily, to enjoy Irepress I don't have to see them live. Typically to really enjoy the full experience of a solely instrumental band it's important to see them live. However, the producer has done them well by incorporating the full air feel of the bands musical convictions.

Why listen to Irepress? Because it's fun and its epic. Imagine flying ninety miles per hour down a highway blasting Irepress and day dreaming of being chased by ninjas and directly above you is an alien spaceship awaiting the downfall of the world and you're the only one who can save the world. By the way, it's raining heavily and your family has been obliterated. That's the feel of Irepress, an epic entourage of expressive guitar and explosive bass.

It's difficult for me to point out the faults in this band. It's obvious that they have worked hard to record the album as tightly pressed as possible. They have completed the task of an instrumental band: to create music that doesn't need a vocalist. I actually tried sitting down and considering a vocalist to match the sound of Irepress. But there is no one that could still compliment the band and not delude the incorporating sound that the band has worked so hard to achieve.

If I had to describe the band I would have to title it “simple complexity.” The songs are very nicely strung together in a way that keeps your attention yet dares to prolong its minimalist nature. Something very daring it today's ADD culture.

I have to compliment the drummer on this one. The songs flow together smoothly because the drummer seems to send the band on its way. While the other instruments are the boat, the drummer is their sail, without him they are not lost essentially, but indeed slow paced. The drummer keeps the listeners interested. And for that I applaud him very much. Great musicianship.

To conclude, the only minor fault of the band is its distortion tone. Some may argue that the guitar tone is too compressed. However, it is of personal opinion that the tone is only necessary to continue the expression of the band as a whole. That's why they are a band, not just individual musicians. Buy this album; it will be worth your time. I'm going to see them live, and I hope you do to.

By the way, they have shared the stage with Wu Tang Clan and Immortal Technique. If you ask me, that's pure balls.-(scenepointblank.com)