Maserati - Inventions For The New Season 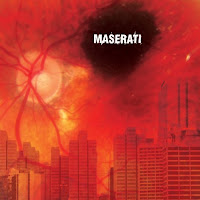 On Inventions for the New Season, Maserati move simultaneously forward and backward away from their clear associations with the modern post-rock of groups like Tortoise and the Mercury Project and seemingly back in time to the progenitors of prog rock (King Crimson, early Rush) and especially Krautrock (Kraftwerk, Tangerine Dream). Their nearest contemporaries may be the prolific yet obscure Finnish outfit Circle, especially their tendencies toward driving guitar/keyboard workouts in the motorik vein, as would befit a band named after the finest of Italian sports cars. These songs hurtle forward at an ever-increasing pace, which they rely on to build intensity rather than the standard quiet-to-loud dynamics of the post-rock genre. Actually, they're not alone in mining this realm of instrumental rock -- they also share with peers the Turing Machine and Ostinato the ability to sound elaborate without actually playing complicated music -- most of the riffs are built on simple, clean guitar figures augmented with chiming and echoing effects and building and expanding in their relentless repetition. Every track here is a stunner, especially the opening "Inventions" and the bass-driven Floyd-ian barnburner "Show Me the Season," culminating in a peak with the tongue-in-cheek nod to the Police's brief foray into progressive rock, knowingly titled "Synchronicity IV." -by Brian Way(allmusic.com)

Official site
MySpace
Buy it
Posted by JaM at 7:25 PM