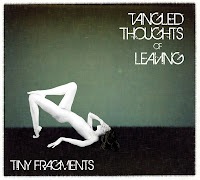 Tangled Thoughts of Leaving's music is progressive by nature. The inclusion of sparse influences, guided by concept and fused together, is the conception of their own sound, as each musicians respective inspirations force the collective into unchartered territory.

A medium sized room, dedicated to forward thinking; the birth of new sound. In that very room, what was previously theory, became reality, and so began the process of four people leaving mediocrity behind them.

In the months of January, February and March of 2008, TToL used their creative space to record a concept, aptly titled 'Tiny Fragments'. This EP was to represent their current thought process. They gave themselves a series of themes, ideas from a previously recorded improvisation and a set amount of time.What followed was roughly 3 months of sproadic sessions, in which the 18 minute, 3 part title track was written and recorded.

With the creation of Tiny Fragments the band have demonstrated that they would rather risk potential failure than never pursue the invention of interesting art.

In late 2008, TToL approached likeminded instrumentalists sleepmakeswaves, from Sydney about doing a split CD. Hundreds of emails were exchanged as each band went away and recorded their contribution for the CD. The final product was released in April 2009 to an extremely positive reaction.

TToL are now working on their debut album, working towards a late 2009/early 2010 release date.