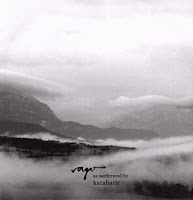 A katabatic wind, from the Greek word katabatikos meaning "going downhill", is a wind that blows down a topographic incline such as a hill, mountain, or glacier...The cold form of katabatic wind originates in a cooling, either radiatively or through vertical motion, of air at the top of the mountain, glacier, or hill. Since the density of air increases with lower temperature, the air will flow downwards, warming adiabatically as it descends, but still remaining relatively cold. Cold katabatic winds are frequently found in the early hours of the night when the solar heating has ceased and the ground cools by emitting infrared radiation. Cold air from extratropical cyclones may contribute to this effect....Katabatic winds are sometimes experienced by yachts at anchor. They often appear after a windless evening and arrive an hour or two after dark. They can blow very hard (up to gale force) for about an hour before dying away. This can be a frightening experience as the anchor may have been set with only the expectation of light winds and the yacht can easily have its anchor dragged. Katabatic winds can go up to 200 miles per hour.

This is the perfect summary of this Portuguese quartet's sound. Wedging itself somewhere between the explosive ambience of Jakob and the cutting experimentalism of Set Fire to Flames, Katabatic explore a distinctly otherwordly sound on Vago. Aside from the initial track, "03:17:00," which sees the band steadily building in intensity, Vago employs the method of aimless meandering followed by the construction of brief, unexpected walls of sound. These explosions are extremely rough and aggressive, yet they lack the punch we generally like to see. Most likely, this is a result of the muddied production; on one hand the low-budget approach creates a dense atmosphere which does the namesake well, but on the other, it also hides much of the subtlety in the compositions which inevitably take the edge off the more focused exchanges.

As such, the majority of Vago comes off as gimmicky. It's taken Jakob years to hone its craft to a true art form, and without the artistic proficiency of Set Fire to Flames, much of Katabatic's material is superfluous. To the band's credit, when simplicity is in sight there is much to love. Moments on "Rising Nebula" and "Midnight Glow" are magnificent, with icy guitar lines and the faintest hints of ambience burning into our hearts. When more ambitious plans are set, an ineptitude in balancing becomes readily apparent. At the time being we can't really appreciate Vago more than just for its theoretical contributions, but perhaps one day soon Katabatic will be more than just hot air - Lee Whitefield(thesilentballet.com)