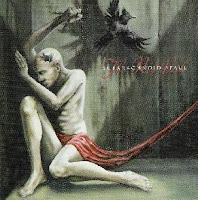 Red Veil is instrumental, metallic neo-psychedelic hard rock of a brittle and grim sort. The spiraling and soaring guitars, often splintering into highly amplified staccato distortions, are driven along by a rhythm section of stoned-face determination, given an astral quality by the embellishments of a pulse generator. These six pieces never do escape from ominous riffs and progressions. If there are faint echoes of the journeys to the heart of the sun taken by Jimi Hendrix and Pink Floyd, these aren't so much voyages for the thrill of discovery as steely resolutions to get on with it, bearing little expectation that what's found in the outer reaches of space will be a garden of delights. Certainly this is the work of a tight quartet, mastering their thick fuzz and mini-novas of sound with the assurance a weather-beaten captain brings to the steering wheel of his steamboat. At times they can lighten the assault with drifts of dissonant sound waves and tones, as you can hear in the opening of the 11-minute title track, and parts of "Trainable" actually border on metal-thrash, though high-volume rock is never too far off the radar screen. It's too enervating to have wide appeal as recreational listening, however, though it seems that SubArachnoid Space are very aware of that.
-Richie Unterberger (allmusic.com)

Thank you so much for posting this! I was afraid I was going to have to look everywhere to find an album by these guys but instead it only took me a few minutes