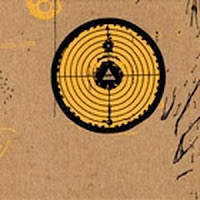 Sparrows Swarm And Sing is one of the new additions to the growing Perpetual Motion Machine quality family. Being a young band, they can already show an impressive history of self-made and well-crafted limited releases. Untitled II originally is one of these as it was previously available only on limited vinyl and self-released cd-r formats. Now The Perpetual Motion Machine records is issuing a proper CD release of the band's 2005 album Untitled II.

And it seems as if the band continues the line of releasing its music in limited edition packages. The CD I'm holding here is a special first pressing, with beautiful screen-printed artwork on a cardboard sleeve. It really feels good to hold this album in your hands, while the mysterious artwork coincides with the exciting music of this post-rock collective.

Untitled II is an instrumental album that, totally in consistency with genre majors Godspeed You! Black Emperor, A Silver Mt. Zion, Mono or Explosions In The Sky, is played as one big piece while the songs distinguish themselves as the parts in-between the relative silence. The album lives on the repetitive build-ups of timbre and dynamics. The warm sound of cello and violin add up to the smooth and lengthy instrumental vibe of this band and where warbly guitar layers start to get weak, the band manages to introduce arrangements that remind the listener they're actually still there. I'm thinking of the powerful drum parts in the song Part III, the not-so-interesting-anymore voice monologue movie(?) samples, or the slightly more interesting well-known baby sleep music tunes.

Almost scary sound crescendos stock up my excitement that floats around Untitled II. And the more I listen to it, the more this album grows on me and the moodier I get from it. In the end I have to admit that, although it's hard for this sort of band to distinguish themselves from the well-known Constellation type of groups, I really like what Sparrows Swarm And Sing does. Its songs are slightly more digestible than the classics mentioned above and the choice of a not too long album (approx. 25 minutes) does this band good. But still I'm afraid that unless these musicians try to add an inventive twist to the genre they're in, this band will never be able to stand up amongst the herd.