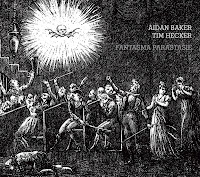 
Tracklist:
01. Phantom On A Pedestal
02. Hymn To The Idea Of Night
03. Auditory Spirits
04. Skeleton Dance
05. Gallery Of The Invisible Woman
06. Dream Of The Nightmare
07. Fantasma Parastasie
Download
pass: lateralnoise.blogspot.com

Aidan Baker, guitarist of a thousand releases and the megalithic drone-metal project Nadja, and Tim Hecker, preeminent lord of the ambient landscape, have come together to record an album. Methought it was an odd pairing at first, but it works perfectly - Nadja's brand of metallurgy frequently hovers into ambience, and Hecker has always been at the noisier end of the ambient spectrum. The resulting amalgamation is Fantasma Parastasie, and it bucks the trend with most side-projects, in that it holds up well next to anything either artist has released on his own.

It's notoriously different to write evaluatively about ambient music, owing partly to Brian Eno's dictum that the music "must be as ignorable as it is interesting." Fantasma Parastasie isn't strictly "ambient" music as Eno envisioned it, nor is it entirely ignorable. It does have that quality, however, of being beautiful in a way that allows it to fade into the background, while being detailed enough to reward those moments when it surges to the fore. In other words, I can get work done to it, but still feel like I listened to it when it's over.

The balance of sound on the album is pretty remarkable. Hecker's fondness for incorporating jagged shards of electric guitar into his own compositions is part of the source of confusion, but, really, the two musicians compliment each other perfectly. "Phantom on a Pedestal" begins with an imposing sheet of guitar feedback that's met by an equally-imposing wall of electronic sound and - somehow - the result is beauty, even as it's cacophony. Hecker's synths sound like they're emanating from the same wall of amps that Baker uses, wrapping the entire song in a warm cocoon of static cling. The rest of the pieces follow suit: "Auditory Spirits" has that distant, ringing sound that defined so many Flying Saucer Attack songs; waves of ethereal guitar feedback are slowly shifted into gentle electronic drones and back again in "Gallery of the Invisible Woman"; the subdued title track relies on gentle, low electronic tones, with guitar squall occasionally flitting to the surface. It's all of a piece and, if you're not paying attention to the progression, it's easy to miss when tracks change.

None of this communicates why the album is good. All you really need to know is this sounds like an album from the same thought-patterns that birthed Labradford and Flying Saucer Attack. It doesn't sound like those bands, but the principles are the same - shoegaze-worthy guitar roar turned into blissful stretches of soundscape, in this case with Hecker's nebulous electronics alternately modulating and subsumed into the noise. It's the sound of entropy decreasing into order, or fixed patterns bleeding into chaos. Noise and silence, power and fragility are not so much juxtaposed as they are intermingled to the point where distinguishing them from each other is impossible - an impressive display of alchemy from two masters. by Lucas Kane (theslilentballet.com)