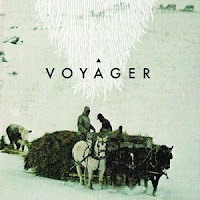 Voyager’s debut EP sees the Boston quintet taking on the sound of former sounds of Isis and introducing some depressive doom ala My Dying Bride in the mix. For one, the production is cleaner than most records put out by Isis and the imitators they spawned. Most notable is vocalist D. Toye’s prominence in the mix. He sounds like what would result if Aaron Turner took lessons from some of Florida’s finest death metal vocalists. If you complained about Panopticon’s submerged vocals, this EP is for you.

While most “post-metal” bands have slight tinges of the post-hardcore that they evolved from, Voyager have no such influence. Though they do indulge in slower, dreamier sections, they focus more of doomy riffs and melancholic melodies upfront. “Crushing Winds” morphs from a Celestial style track to a Crowbar wind-down jam. “Drifter” features some interesting guitar improv, but it is only a prelude to the EP’s second half. “Surfacing” is a monster of a track, building up and crashing down again and again. The final minutes of the song even bear some resemblance to Celestia before drifting off into noise. However, the cutsey chime in “Static Pulse” ruins the mood.

I would recommend this EP if you like the genre. However, it won’t get you into it if you’re not already a fan. These guys have potential. (sonicfrontiers.net)

MySpace
Buy it (Sold Out)