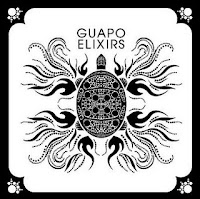 Guapo are very deep. Their press release is chock full of words I don't understand relating to and hinting at themes I am not familiar with. While psychadelic music is known to me, never have I heard anything quite like Elixirs.

Instrumental Pink Floyd, disturbing horror movie soundtracks, Mogwai gone goth...it's hard to pin down the sounds on this album. "Jeweled Turtle" quite literally scares me, it's foreboding and restless strings melding into a sort of funeral dirge for someone who never comes back from an LSD trip. It mellows out towards the last-half (track is 13 minutes) and eventually starts to sound like something from a similar group, Secret Chiefs 3; something middle-eastern and rootsy, while retaining that undercurrent of dread. "Arthur, Elsie and Frances" sounds like carnival music gone completely wrong; a sect of drugie clown nihilists who come across a room full of musical equipment on Halloween night after getting wasted on absinthe and mescal. Totally fucking bonkers, but also totally enjoyable. The two "Twisted Stems" tracks are somewhat more subdued, mellow and feature some vocal work. Probably the closest things to typical songs on Elixirs. "The Planks" is just badass, a quick rhythmic shot of adrenaline before the closer "King Lindorm" manages to pull all of these sounds together into one last, concise and deliberate dose of "what the fuck".

You'll notice over there on the "Try if you like" list, one of them says "Scary ass shit!". This is more or less what I got from Elixirs, beyond the obvious masterful musicianship, myriad of enjoyable little musical moments and an overall atmosphere that chokes you as much as embraces you. Guapo are deep, but not to the point where you need to do any digging. They've made the hole for you; just jump in. But don't play this one in the dark, with no one around...who knows what your feeble imagination might conjure up... (musicemissions.com)