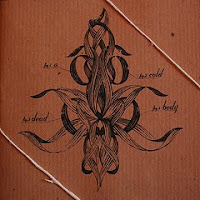 A Cold Dead Body is a band from the North-east of Italy. Everything started in 2005 as a one-man-band of lead singer Sten (ex-singer of the Metal-hardcore band Zune). After Zune's dissolution, this project finally became a real band starting the activity in 2007.

In 2009, they released a Promo EP of 3 tracks – the preview of the forthcoming debut album (spring 2010) – which is the very first publication of Earthache ArtLab - an art collective founded byLorenzo Cercelletta, Lucia Violetta Gasti and Cristiano Perin(members of the band).
Being realised in a limited number of copies (#150), each piece is handmade and hand-numbered, thus unique, and almost entirely made of natural and recycled materials.
The 100 Promo copies issued for the sale went sold out in about 48 hours.

Their first release promise big things to come, it remains to see them fulfilling our expectations.

Many thanks! This is great.