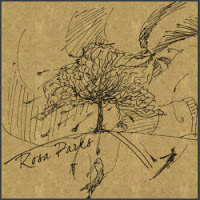 Rosa Park is a four-piece group hailing from Győr, Hungary. They took their name from Rosa Lee Parks, a civil rights activist who was born and lived in the U.S.
Rosa Park were formed in 2007 and this EP is "celebrating", in a way,  their first two years of being together. I found the music wonderful and easy to listen to. It creates a nice atmosphere similar to "Explosions In The Sky", "Caspian", Scraps Of Tape and the likes...

As Gergő wrote in his message, the band is inspired by underground clubs, friends, hunger, history of injustice, melancholic moments.

You see, the s key is beside the d key so she was alive again for a little while!!

Anyway, thanks for the correction.