East Of The Wall, Year Of No Light & Rosetta - Split 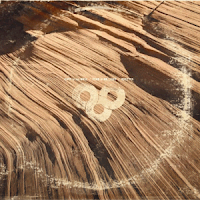 Post-Metal is a sparse genre. Bands like Neurosis and ISIS have pioneered the genre nearly singlehandedly , then explored every nook the genre has to offer, almost exhausting the genre by themselves. There is not much left to do in the post-metal genre except try to perfect a sound or attempt to find a new one. Three of the most respected names in the underground post-metal scene today are New Jersey based East of the Wall (formed out of the ashes of progressive band The Postman Syndrome), France's Year of No Light and Rosetta hailing from Philly. Each of these bands have high credentials in the underground post-metal scene, but have yet to burst into the mainstream. None of them are fighting to break free from the chains the big guys have tied them down to, but each of them are unique in their own way. Bringing them all together for a split (or should it be called a tri...?) to showcase what they have to offer is a logical decision, and one that proves to be a very enjoyable listening experience.

First up to the plate is East of the Wall with their three part mega song 'Scumbrella'. Starting off with a melody that sounds like a Russian folk tune, 'Mud Button' is a song you have to hear to believe. The song is short and sweet at only a minute long, but it packs in enough substance to stay interesting. A thrashy riff rolls through out of the Russian melody, followed by a down tempo section that segues the song right into the next. 'Silt' is a quiet interlude that acts like the gatekeeper to the main even that is 'Dirt Merchant.' At nearly 8 minutes long 'Dirt Merchant' is classic East of The Wall; progressive and heavy. A slight melody change lets you know that the previous track has ended and the next has begun. The track flows perfectly, bringing together many ideas into one tight package. A fuzzy intro leads into a bass and guitar jam which leads into a galloping rhythm part. The bass is very prominent in East of the Wall's songs, which is nice to hear from a post-metal band. The band dabbles in some post-rock influenced sections before coming together for a balls to the wall metal climax at the end. A delayed guitar rings out waving goodbye, leaving the listener with a great final impression of East to The Wall.

French act Year of No Light starts off the second side of the split with 'Cimmeria.' Right from the start Year's distinct sludgy guitars enter, followed by their Steve Von Till (Neurosis) like vocals. Similar to their full length, the vocals are pushed back in the mix, letting the band take the foreground. Even if one is fluent in French the lyrics are still inaudible as they are purposefully fuzzy, however this is not a bad thing. Unlike their previous work, the songs on this split are a lot more sludge influenced, heavily recalling early Neurosis. As mentioned earlier, bands in this genre typically do not try to innovate, but improve, and Year of No Light have almost succeeded at that task. The songs here do not live up to those on the full length, which is unfortunate. Those looking for the raw aggression found on Nord will be disappointed to hear the new Year of No Light. However, this approach works to some degree. One of the most interesting aspects of the two songs are that they are in major. At points they sound very uplifting and almost happy, but the downtuned guitars and thick bass drown out those emotions. Synth strings and keys can be heard in the background further adding to the feel of the songs. Although the two songs Year of No Light contributed to the split may be their weakest, they are still worth a listen for fans of the band.

Last, but certainly not least is Rosetta. Rosetta have chosen to contribute a cover of post-punk legends The Cure's 'Homesick'; an interesting choice for a post-metal band to say the least (funny enough, Year of No Light has been quoted by critics as "The Cure playing sludge.") Surprisingly, Rosetta pull it off incredibly well, making for the best song on the split. The band sticks very closely to the original song, but add their own Rosetta flair to the tune. Delay drenched guitars smoothly play the dual guitar melody that begins the song instead of acoustic like the original. Clean vocals enter, but it seems as though the entire split was produced and mixed by the same person, sadly pushing the vocals too far back like on Year of No Light's songs. Rosetta adds layered vocals to the mix, pilling up crisp growls over the clean vocals. The track flows just as well as the original, coming to a steady jam near the end with entirely growled vocals. Rosetta could not have done a better job on this cover, they stay close enough to the original while still adding their own twists, making it a must-hear for fans of either band.

Three of the best bands in underground post-metal converge for an excellent split. While none of them are reinventing the post-metal wheel, they are each doing something new to spice up the old recipes of the genre. East of The Wall pulls no punches with their three part epic 'Scumbrella'. Year of No Light decided to go Through Silver and Blood era Neurosis and cover us in sludge, but unfortunately not pulling it off as well as one would hope. Finally Rosetta delivers one of the strangest, but best, cover of The Cure's 'Homesick.' All in all this triple split is worth the cost of admission; there is something for every fan of the genre to be found here. by Alex C. Soothsayer @ sputnikmusic.com

just wanted to say i'm digging this blog a lot! Check out mine if you want - ritualroom.blogspot.com