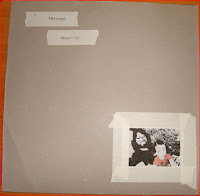 It is traditional that every year I "pen" a review that contains a sentence that says "it is traditional that every...", hang on, this isn't going to work... Ok, every year we get one or two emo records that are worth adding to the pantheon of the genre. This year, both of those LPs have been released by UK bands. One of them is Kids Return. When I put this LP on last night for the first time, my jaw dropped and I played air guitar in the kitchen instead of washing up to the spiralling climax of "The World Is Burning...". It was spot on, it was the best kind of music. The music which takes over my dis-coordinated body and makes it move in some kind of rhythm, clapping my hands and not really looking like I am quite with it.
Kids Return offer up 8 songs of intense, melodic emo. It's all about the driving guitars that play off each other, working in the twinkles, the sing/speak/shout/sob vocals, and all the other elements that this sound is known for, albeit so sporadically in the waning years of the first decade of the twenty first century. The vocals are a particular stand-out for me, I am struggling to think of a way to phrase it without sounding horribly technical, which would be so far removed from the music, so I won't bother.
There are all sorts of bands that this compares well to, chiefly it brings to mind Life at these Speeds first LP, but also the REDS LP, and with touches of Yaphet Kotto and September. It's not a direct imitation of any of those, nor any of the many other mid 90s forebears, but the band brings together each component to create a fine, fine album.
It would be amiss of me to neglect to mention the attention to detail in the packaging, this has been lovingly crafted and proves that the people in this band are up to their necks in it. With so few bands going the extra mile these days, it's impossible to dismiss it as cynical or bandwagon hopping as it may have been back when every emo 7" came in an envelope with 100 screen printed pictures of broken, rusting cars.
Be sure to spend a few moments with the lyric booklet too, for it contains observations and feelings that will strike a chord with most if not all. Who knew emo lyrics didn't have to be about lost love or so contrived that they were lost on all but the writer?
And so. 2007 draws to an end, and we get that emo record that a few of us crave, to keep the music ticking over. Wonderful. -by Andy Malcolm(collective-zine.co.uk)

Email ThisBlogThis!Share to TwitterShare to FacebookShare to Pinterest
Labels: INDIE

I heard this when it first came out and it blew me away as well. Could you re-post possibly?