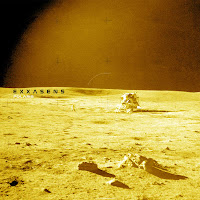 The future of post-metal is blurry. As blunt a statement as it is, I'll go even further and say that it has always been. From its inception, the genre has been searching for itself in the same bumpy, awkward way a blind man looks for its cane on a hungover Sunday morning. Ask ten different people what post-metal is supposed to sound like, you'll most likely get as many different answers. This is easily explained: every established band switches sounds completely in between albums, sometimes in the most harmful way (as usual, see Pelican), while those that aren't recognized as leaders try their best at copying their forefathers measure by measure. One could argue that it is standard procedure for a genre to take some time to find its marks; but post-metal has come to a point where there's been a debate among fans for years about its very existence(!). While some claim it's just a style that oscillates between melodic doom-metal and heavy post-hardcore, others state that it does exist, but is indeed comprised of and limited to anything that sounds exactly like Isis' Oceanic.

In such a context, as the new album queue swells up, it’s becoming painstakingly difficult to find anything good. Let's take a look at this year's pedigree: the new Russian Circles made a good impression, and... that's it. Six months, one noticeable album. The picture isn't pretty, and it makes me wonder; have we reviewers grown tired of the countless half-assed attempts at this music, or have the artists themselves? Some of these records sound like the people behind them aren't even trying anymore. I, for one, am ready to give a chance to anyone who still feels like making some good music. And on cue comes Barcelona's promising new one-man band, Exxasens.

As any astute reader of this review will have guessed, this is a long way from being the album of the year, but keep on reading. Polaris is one of those albums that give a very enjoyable impression on the first listen. Exxasens' music is catchy, tailored for the listener to fully express himself through the art of headbanging. Often, it's right after this first listen that most records of the sort fail to impress; the early excitement dies down, you start paying attention to more than the main riffs, which may lead to plain disappointment. Fret not, a more acute analysis of Polaris doesn't give heartburns, but it does point out the fact that something is missing.

Like I stated before, one of the plagues of post-metal is the distinct lack of originality in up-and-coming acts. Most tend to walk in the footsteps of their elders, in more or less successful ways. I can't help but feel that Exxasens relies too much upon what's been done before:obvious progression from quiet to loud, hefty use of layering, doom-esque basslines, subtle drum breaks every few measures; if you've listened to anything from the genre before, chances are you'll easily anticipate ten seconds in advance everything that's going to happen. Thankfully, and this is where Exxasens separates himself from his peers, it doesn't stop here. Some elements give Polaris a feeling of freshness, the most salient being the incorporation of electronic structures within the music. The album is very fast-paced and samples are thrown in here and there, while the drum breaks often resemble the percussions one can find on an idm record. Fellow reviewer Tom Butcher said it best in his review of Blackwaves' [album artist=Blackwaves]012[/album]: drumming can make or break an album. The drum work on Polaris is really what kept me hooked throughout my many listens, and while it's not the most innovative, it makes for a perfect backbone to the upper layers of sound.

For a debut CD-R, Polaris shows a great amount of potential. In a genre where fans have become used to disappointment, the bits of originality and seriousness Exxasens displays are enough to look upon his music in a positive way. What he needs now is to further explore his own voice and let go of the reassuring hand of the bands that paved the way. I can tell he has a genuine passion for his music, and that single fact convinces me that his next release will be one to watch out for.-by Samy (The Silent Ballet)