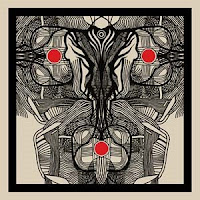 I've always been very sceptical towards bands that change genres with every new release. Shora, from Switzerland, is around since the late nineties. I still remember their debut cd that came out in 2000 on Grave Romance (Shaping The Random). It was one of the best European Converge / Botch styled metalcore releases of that year. Two years later Shora released a split cd with noise master Merzbow. Their songs on that split were fucking hard and extreme metal. And now, at the end of 2005, they're releasing an album that's blooming of delicate and atmospheric post-rock, combined with a touch of electronica. Isis? Yes, but different. Certainly, Shora has fully joined the league of bands as Godspeed You! Black Emperor, Isis and Red Sparowes. At first sight the four songs on Malval have all characteristics that are typical for the genre. It's only when you get yourself deeper into the artificial world of the songs though that their true force gets revealed. Because unlike many of the aforementioned bands, Shora's songs don't depend much on the typical crescendos and sudden explosions of melody. The powerful thing is that the songs remain very dynamic nonetheless because of unattended rhythmic breaks and slumbering melodies that nestle themselves in the back of your head. The third song, Siphrodias, is probably the best example of that. The guitars and moody noises are building up the tension and when you'd expect the song to burst out into the most emotional heavy part, there's just a few seconds of silence… It's details like these that make this album as powerful as it is. As said before, Siphrodias is a good song, but it lacks the underlying mood-shifting melodies that lift the three other songs on this album to a higher level. The first two songs, Parhelion and Arch & Hum, as well as the last one called Klarheit, are beauties of experimental rock. They're taking your mind away on a trip that's never revealing what's about to come next. And that's exactly what makes it so captivating. Everyone that's willing to do some effort to get into the instrumentally painted Shoral landscapes, is about to encounter the thrills of beauty, joy, despair and hope in just over half an hour of music. Malval is an album of undisturbed guitars, subtle drums and moody keyboard touches. Anyone into postrock can gear up for another instrumental mysterious voyage that might look a little typical at first sight, but that's far away from postrock clichés in the end. Forget about metal, Shora anno 2005 is softer yet touching souls harder than ever. No need to be sceptical. (semtexinc.com)

Official site
MySpace
Buy it
Posted by JaM at 12:23 PM