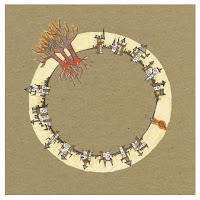 Dosh fits many of the backpack rapper stereotypes. He sits on the Anticon roster, a bastion of rule-breaking hip-hop that has no truck with the likes of, say, Cam'ron or Petey Pablo. He comes from Minneapolis, home of the Replacements and Prince, but wanting for nationally known rappers, save the canonized-on-the-quad Atmosphere. Dosh's beats aren't composed of soul samples, drowning in bass, or expressly built to house verses and choruses: they are impressionistic, surging, cut loose of 4/4 constraints. Over the frenzy of drum machines and looped samples, he would take the pensive swirl of his vintage Rhodes and pile it dramatically-- with a flair for surprise-- on top of something else.

But he doesn't rap. His connection to the genre won't be obvious to most listeners. In fact, you might call him electronica's answer to the rising tide, reported in The New York Times Magazine, of one-man operations that sound like bands. But listening to Dosh, as opposed to listening to the equally skilled Four Tet, you don't have the sense of technology rudely intruding into the creative process, of the wizard too busy to care whether we can see him behind the curtain. He does care: where Four Tet parades his mastery of vivid, unapologetic collage, Dosh goes for a mastery of illusion.

So like any illusionist, he takes care to start and end with a bang. Only Dosh could imagine, let alone orchestrate, a meeting of Andrew Bird's tender violin and Fog's hyperactive guitar and bass. The play of vibes and keys lends this, the album opener "Don't Wait for the Needle to Drop", a mesmerizing texture, the grooves recalling a funk-tinged, gamelan symphony. "Capture the Flag" falls on the other end of Wolves and Wishes, where it reaches for the same exotic grandeur. Strings appear again, in sampled form, along with the Dosh's fuzzy arpeggios. But now we hear a sax pumping away. And more surprisingly, we hear Dosh's own voice lowered over the maze of noise, cutting a passage of coolness and clarity into the thickets of dense, off-kilter instrumentation.

Between these bursts of color, the album rarely tones it down. Without sounding repetitive, a network of reappearing themes, people, and sounds holds Wolves and Wishes together. Andrew Bird returns to grace "Kit and Pearle", for instance, with more anguished turns on his violin, underneath Dark Dark Dark's sighing vocals. The outer tracks' air of exoticism pours back in on the rhythmically brilliant "Food Cycles" and "Keep Up Appearances". And Dosh's protégé Mike Lewis launches his sax into Jeremy Ylvisaker's vibrating, room-filling sheets of reverb on "Wolves". Not until we reach the final minutes of the tectonic, Sun Ra-repping, Arthur Russell-influenced epic "First Impossible" do we hear an unexpected, unmistakable rap beat. It fits right in. People want to call this IDM. The label tells vendor to file this under "Rock". Bristling with jazzy forms, infused with a global soul, Wolves and Wishes turns hip-hop's philosophy of bricolage into a glitchy, raucous, genre-spanning achievement. - by Roque Strew (pitchforkmedia.com)

Official Site
MySpace
Buy
Posted by MeTSam at 12:22 AM