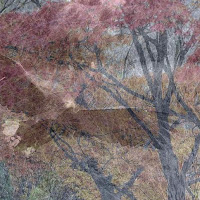 Post-rock, in case you're a neophyte, is a genre of alternative rock defined by the use of common rock instruments for non-rock purposes. Guitars and drums are standard, but the rhythms, harmonies, melodies, timbre, and chord progressions used are not found in the rock tradition.

Basically, your typical post-rock song will consists of long guitar jams that explore layers of sound in order to create a certain mood. It is a genre that requires not only great technical skill, but a strong melodic imagination.

There is quite a considerable number of bands out there in our local scene that dabble in post-rock. Most of them border on only just decent, simply because they lack imagination. There are even fewer bands here that play hardcore post-rock, the darker side of this musical dream-weaving, as this subgenre requires technical mastery and a lucid imagination; which narrows the field of play tremendously.

South Jakarta-based GHAUST is one band, however, that manges to thrive beautifully in this dimly lit alley of post-rock. The nightmares constructed by this collective (comprised of Uri A. Putra (guitar) and M. Edward (drums)) are built with the utmost precision. The layering of instruments, the slow but steady progression of hard chords, the grinding distortions and the calculated drums are dispersed in careful doses that guide the listener through each space of the somber realm of their musical machinations.

After a few online releases, as well as participation in various compilations, this year saw the release of GHAUST's self-titled full length debut LP, available nationwide through Purbaharuan Recordings. This powerhouse of an album is guaranteed to take you to corners of your imagination previously untouched by other bands. This record is truly mind-blowing; as you read, I'm still picking up the pieces of my brain that were scattered across the floor upon my first listen. It immediately gets a place on my list of 2008's Top Five Local Releases.

GHAUST is an experience the listener would never want to, or be able to forget. Their music will seep into the nooks and crannies of your mind and build little grim empires in your subconscious. I am truly curious as to how their sound will evolve in the future. I will definitely keep my eyes on these guys.

Enough of the grand descriptions, you can learn more about GHAUST firsthand and give a listen to their brilliant pieces at www.myspace.com/soundofghaust. Be sure to leave them some nice comments. Their self-titled debut LP is now available. For a complete listing of record stores that sell the CD, check their myspace page. Be sure to buy it! -by (thejakartapost.com)

See my music blog at: