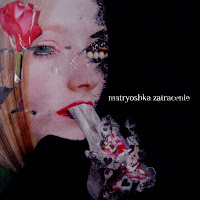 Look at that cover. Really look at it. At first glance, you’re staring at a lovely woman. Then you realize that one of her eyes is actually a mouth with blackened gums, and that the back of her head is decayed. Resting gently in her mouth, like an unused reed instrument, is a bone, from which flowers are blooming. A slightly mangled gift bow nestles in her hair. She looks alive, but neither happy nor in pain. Now you’ve got an idea of Matryoshka, a frightening yet appealing blend of cherry blossom and J-horror. This release may be pretty, but it has a scary edge.

Zatracenie may be Matryoshka’s first effort, but in 2007 it captured the Japanese zeitgeist and was named the nation’s best electronic album. Those who follow similar efforts know that the competition was fierce. Vocalist Calu possesses the intonation of the Cocteau Twins (a comparison that is made all too frequently, but in this case is apt), which shines forth in efforts such as the sparkling “Veridian.” Instrumentalist Sen conjures the feel of a mini-orchestra, reminiscent at times of Tokyo mates Mokyow and at other times of Piana. But what stops this release from tumbling into fluffiness is an ever-present sense that something dangerous is lurking in the background, waiting to pounce. Turn your back on this duo and you may find yourself without a liver, or worse.

The industrial drums on opening track “Sink Into the Sin” are an early indication that Matryoshka has more on its mind than producing innocuous, comforting tracks. Album standout “My Funeral Rehearsal” builds to a swirling crescendo before dissolving in cacophony. “Tyrant’s Miniature Garden” begins with orchestral flourishes, descends into pop, and re-emerges as a chamber rehearsal backed by a combination of snow-crunch electronics and military drums. “Ezekiel” is downright foreboding, a cinematic slow-burn that would make Lamb proud.

Matryoshka wears its influences on its sleeve, but instead of pirating the sounds of its predecessors, the group combines them in such a way as to create a distinctive sound. Zatracenie tucks surprises in napkins, dusts corners with strings, washes rusty drums with crystalline lullabies. It’s easy to see how the album won the heart of its homeland: the music is accessible enough to appeal to the masses, but raw enough to woo independent minds. A new album is not far behind; four demos have already been posted for the follow-up, which should emerge in the thinning light of autumn. Fans of the aforementioned groups are advised to investigate without delay. -by Richard Allen (thesilentballet.com)