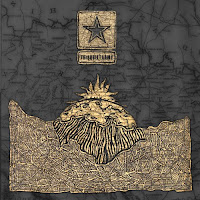 Thisquietarmy is a solo project of young Canada-based artist Eric Quach. He is also known for being a guitarist in a renowned shoe-gaze band Destroyalldreamers. As Thisquietarmy, he explores never-ending spectrum of guitar ambience and loop drone sounds. From the mellow opening of "Immobilization", through grandiose "Battlefield Arkestrah" and "The Sun Destroyers", gloomy "Death of a Sailor", to closing notes of "Empire", Eric Quach manages to capture the essence of contemporary alternative guitar experimentation while maintaining disturbing but also captivating aural atmosphere.

"Unconquered" presents this musical project as consciously standing among the best artists of this genre, which is symbolized by the guest appearance of Aidan Baker. On the other hand, Thisquietarmy, already on his debut album, looks far into the future and crosses the boundaries, the best sign of which are the clean female vocals of Meryem Yildiz in one of the tracks – something not common in the field of ambient drone guitar music. Eric’s experience in Destroyalldreamers, numerous live performances, brave open mind and genuine artistic freedom allowed him to deliver his first official debut full-length album in a flawless and extraordinary way. -by (someplaceelse.net)

Yes, I love Thisquietarmy, but I don't have this one yet. I only have the Aiden Baker collaboration and Wintersleeper.