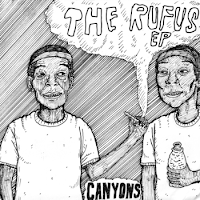 Tracklist:
01. Are You There God? It's Me Rufus
02. Dirt For Sale
03. Milwaukee Talkie
04. Backslider
05. A Question Of Ethics
Download
It didn't take too long to spot this shoutbox message on our blog. I don't like the name Rufus at all so I tried to ignore it. I don't know what made me download it! The only thing I know is that this "Motorhead meets Cult of Luna meets Sex Pistols" Monster knows what it is doing... Check 'em out!!
And as they say themselves:
Canyons is four guys Loud amps and ooh that smell.
Rufus is the party.
Since day one of the CanyonsHouse house shows, Rufus has mingled with touring bands from all over and we've all had a blast.
We wanted to immortalize Rufus in song. So we did. We are in the middle of some projects and realized we had songs we still play live that never saw a real release.
If anything we've written so far deserves a single... it's Rufus.
That being decided we picked two songs to cover to throw with the old and new songs then visited UTG studios on Halloween.
The purpose of this ep is to raise Rufus Robinson awareness. That and to let people know Canyons wants to party.

Official site
MySpace
Posted by MeTSam at 11:30 AM