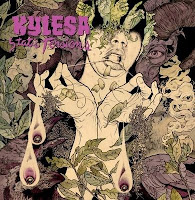 While always holding down the fort as a doom metal band, Kylesa has been a great story of maturity in evolution. On their 2002 self titled debut Kylesa was a rough around the edges sludgy doom metal band heavily influenced by the hardcore scene which was becoming the center of the heavy music world’s attention. However, unlike many of their counterparts (Bleeding Through being a good example of a group who has remained static for most of their career), Kylesa has gone from a youthful band adopting the sounds of their peers, to coming into their own as a band best amplified on their latest release, 2009’s Static Tensions. This isn’t hardcore tinged doom anymore, this is a full on psychodelic sludgefest.

Now instead of echoing images of their hardcore brethren, the metal fan will probably liken Static Tensions to the breakout stoner artists The Sword, more than any other group. I don’t know what long time Kylesa fans think of this their latest album, but the crisp guitar tone, laid back drum technique, and well produced vocals leave me, as a newer fan, smiling from ear to ear because I tend to eat this stuff up. Older Kylesa was much more heavier and raw, especially off of their self titled debut, and really brought the aggression, but I think the band has shown true gusto by going in a much more atmospheric/psychodelic direction. Don’t get me wrong, the heavy “sludge” factor is there still which Kylesa should never lose in my opinion, but it’s much, much more refined with far superior production values.

Essentially, Static Tensions represents the band’s transition from the pecking order, into a fully grown outfit. I hope that doesn’t sound derogatory because as a listener, this is about as big of a comment as I could give these guys. Kylesa, despite being a metal band, is one that does not need to rely on heavy, pulse pounding aggression to get people to buy their record, instead, they can interlace quality songwriting with excellent production. Of course, knowing when to turn up the heat and blow people’s faces off is always good too, and thank God that Kylesa still knows how to make eyeballs pop out of people’s heads like Arnold in Total Recall. Oh yeah! - by CODY @ allmetalresource.com