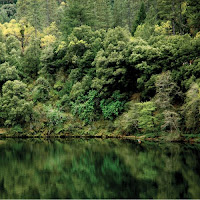 Confier play psychedelic sludge metal in the same vein as Pelican and The Russian Circles, pushing heavy, wiry instrumentals to stratospheric heights. Making Crown Fire stand out, aside from its stellar musicianship, is its organic flow and Eastern-tinged flourishes. Its spiraling riffs and cyclical percussion roll on hypnotically, creating a immersing, stoner-friendly torrent of sound. Its more expansive pieces are set beside dense jams like "Song for Krom" which blends deep bass attacks a la Kyuss with celestial release.

There’s really nothing wrong with this record - its focused, intense, well produced and a fine thing to trip out to. Conifer do however sound very similar to their many rivals in the the sludge/doom metal genre, making their natural and fluid sound seem more constrained than it should. There are some attempts at experimentation, including some spacey post-rock noodling ("History of Disappointment") and even some oddball vocals towards the end of the record, but these brief moments seem somewhat forced compared to their more refined and confident performances.

While Crown Fire may not be breaking any new ground (I know, its an unreasonable expectation for this young band), its still a great piece of work that matches the tremendous energy of Isis, Pelican, Cult of Luna or whoever else is leading the post-metal pack these days. If you are already immersed in this exploding underground scene, then you should certainty check out Conifer. They are, as their name implies, one of the most organic sounding metal bands around. (therockblogger.com)