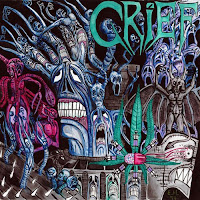 Grief are not a happy band. On this, their second release, they continue their own brand of world hating doom begun on their debut 'Dismal', reaching into the very core of emotions such as hatred and anguish, wrenching them into the world for all to see. They not only hate the world, they also hate themselves: "I slither in the dirt and mud, because that's where I belong".

Grief have long been compared to such "sludge" greats as Crowbar and Eyehategod. The truth is, they are like no others. They sound only like themselves, and the disgust they emit with every passing, languid note, has yet to be replicated by any other band. Think of all the pain and hatred you have ever experienced in your life, and then multiply that by 100. You will be near the emotional state of this band.

Musically, Grief are a very "harsh" sounding doom band. The production on this release is certainly worthy of the music, but don't expect the slick nature of more romantic doom metal bands. Grief are dirty, they really are in the mud, and the sound takes you down there with them, into their world of worms. There are no stand out tracks, the album flows from one song to the next, a seemingly endless stream of suffering, and abject hatred for all of humanity.

Grief is certainly not for everyone, in fact they are probably for very few, but if you enjoy the harsher side of doom, then pick up 'Come to Grief'. You too will then know the pain of these tortured souls - some of it at least.