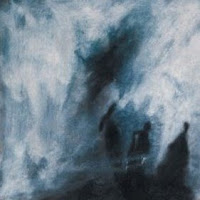 Last year sunn 0))) was invivted to perform at a ancient cathedral in Bergen Norway . The performance was captured via 24 track mobile recording and the resuluts were pressed onto double 180 gram vinyl. This recording will be available exclusively on vinyl only. There will not be a digital release (cd or downloads). Pure analog! The 0))) lineup for this performance includes Attila Csihar (Mayhem) on vocals, Steve Moore (Earth, Ascend) on the churchs' legendary pipe organ and Norwegian native Lasse Marhaug on electronics.

The packaging for "Dømkirke" was designed with the utmost attention to detail and quality that perfectly compliments the audio content. Each 180 gram vinyl comes in a heavy stock, full color inner sleeve that features stunning photographs from the performance. The cover of the gatefold jackets feature exclusive art by Tanya Stene (Burzum, Ulver, Darkthrone).

The jackets themselves are ultra-durable extra thick cardboard stock with thick, luxurious lamination. These were modeled after the Impulse! labels' LP jackets from the '60s. This package is durable, built to last and serves as the perfect shelter for this archival release.

Nicholas Mollerhaug, the festival curator, wrote these liner notes for the album:

"Our idea behind this concert was to commission a piece of music from Sunn O))) referring to the gothic gregorian hymns of the Late Middle Ages. Hymns that flourished Bergen Cathedral in its earliest years: The age of the Great Famine and The Black Plague. The gregorian hymns of this time reflected the despair, the terrors and darkness of the world. Musically the hymns consisted of long slow lines of unison melodies. The unisonity, the dark mood and the slow melodic development are all elements that also can be traced back to Sunn O)))'s musical universe. These parallells between Sunn O))) and the medieval times gave birth to this commission - premiered at the grand final of Borealis Festival 2007.

The Bergen Domkirke is dedicated to the Norwegian king and patron saint Olav (995-1030). The church was built around 1150. In the 1240s it was given to Fransiscan beggar munks. After fires in 1248 and 1270 the building was extended. With the financial help of king Magnus Lagabøte (1263-1280) the church got its present form and was finished in 1301. The very same king is buried in the chansel of the church. After the reformation the church became the cathedral of Bergen. It was then again struck by fire in 1463 and 1702. A cannon ball in the the church tower is a reminisence of the Battle of Bergen Bay in 1665.

This record documents what happens when aesthetic openness and lack of prejudice rules in a medieval cathedral.

Without these values inhabited in the legendary kantor of Bergen Cathedral- Magnar Mangersnes - this concert would never have been possible.

Hey, maybe this is a bit offf topic but in any case, I have been surfing about your blog and it looks really neat. impassioned about your writing. I am creating a new blog and hard-pressed to make it appear great, and supply excellent articles. I have discovered a lot on your site and I look forward to additional updates and will be back.