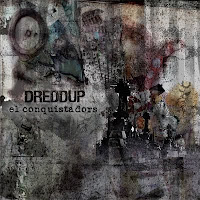 Music of dreDDup is a mixture of dark noisy sounds with rough industrial rhythm followed by metallic vocals. They are mostly influenced by post industrial music scene of the late 80's and the mid 90's. After experimenting with weird noises and rough drum beats they embraced commercial segments in their sound, making it more popular for some wider range of listeners. Today, they sound like a crossover of every genre they get in touch with.

dreDDup was formed 4th of June 1997 in the small city of Novi Sad Located in Serbia (Europe). In the beginning the whole band were two punk guys who began to experiment with electronic music. They DIY produced their first demo 'BDTP' in late 1997. and their first demo album 'Abnormal Waltz' in late 1998. During the late 1990s dreDDup were part of what was known as the post- industrial / noise influenced band but their sound changed rapidly - finally gathering it all under the label of industrial / crossover. Many DIY cassette EP's and demo soundscapes were recorded in that period but were never officially released. Live performances took place and members changed.

Exploring the dark sides of the human mind and the distorted production of truthful industrial crossover music, they've released their first official album 6 years later. 'Mr Bordnead's Feast' (2004) saw the addition of violins, keyboards, female back vocals and live instruments. It sounded more mainstream and commercial but band did it with a purpose to get the attention from the Serbian media. More innovative than old demos , yet retaining all the key elements of the early era, 'Mr Borndead's Feast' was slightly darker, although a long way off the intense darkness of the first two demos. This album talked about the past and the bloody feast of the close minded. 2004's showed a band continuing to expand and redefine their sound and purpose. A substantial increase in live performances - once an unheard of rarity - has lead to much greater recognition by a new generation of fans.

In 2005, Holland music label MoocSound Records , released their 'Mr Borndead's Feast' album in digipack format. Band than produced several videoclips and entirely dislocated their sound from the other surrounding bands. dreDDup's next release came in august 16th. 2007, when they released their second album - 'Future Porn Machine'. Following the footsteps of 'Mr.Borndeads Feast' this new album sounded more darker and more industrial rock than the previous one leaving the production rough. The main concept of this album was the pornographic future, where art = pornography = art where machines are replaced by humans. "Insurrection Records" from Belgrade recognized this band's music and agreed to release this album. dreDDup than finally abandoned that mainstream sound and went back to the basics of their music leaving the old work behind. After this move, they finally got the recognition by the wider audience. It continued by making the official remixes for Nine Inch Nails and re-relase of their old demo album 'Abnormal Waltz' on CD for 9 foreign labels.

In 2008, the band was included in much of the foreign music compilations. Third album 'El Conquistadors' was than finished in late 2008. This album was meant to be totally different from their previous ones. The new dreDDup sound followed more post- industrial sound and less melodies, including some very dark vocals and music that brought new dark energy in their live performances. It's concept was to bring the old sound from the 80's back to life. All 15 tracks are for the "chosen ones" only and band decided to release a bonus DVD with it. DVD contains "Industrial Renaissance" 40 min documentary about the band and 50 min live video of the dreDDup show "Live in 219". This album was the last one in time trilogy and is talking about the present tense and human inner boundaries. Album was officially released for Insurrection Records on March the 6th 2009.

Although primarily a musical group, dreDDup has sometimes worked in other media. In their early years, they've produced several works of video art., film soundtracks and theatre music. Collaboration with many underground acts and artists also took place in their career.

They are currently on tour and working on their new fourth coming album which is about to be released in the beginning of 2011. This will also be the last dreDDup album.