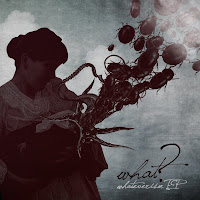 
Tracklist:
01. Whateverism
02. Odium Of Being
03.Lost Beyond Recall

20,000 amps and more: Germany is back on the map with alternative rock sounds - What?'s Whateverism EP has more current than a lightening strike. The 3 songs are not only dynamic and captivating, they also provide a wide base range where several emotions fuse into each other. Changing from melancholy to anger, What? finds the right atmosphere for its sophisticated and extraordinary arrangements. Kurt Ebelhäuser (well-known German producer) has equipped the band from the Ruhr area with a powerful production which completes this great band’s line-up.
It is clear that What? has a lot up its sleeve and the Whateverism EP is just the beginning of great things to come.
However let's start with the present.
The songs boast an intensity that might remind one of Placebo at times but very quickly you see that such an association is out of place. Altogether the songs feature a considerable tension; in the climax they resemble an emotional eruption. It grooves and each time you listen it gets into your brain more deeply. The band radiates great vitality and delight in playing, using unconventional instrumentation. They hit the accelerator hard without sounding monotonous. This emphasizes that What? possess a real keen sense of enthralling song composition.
Eleven minutes of progressive guitar storms between alternative rock, hardcore, metal and many other styles that influence What?.
You feel that Ingo (vocal), Skotty (guitar), Schrör (bass) and Marc (drums) know their trade and now want to know their limits.
What? is a well-oiled rock machine with lots of steam and pressure behind their pistons. The Whateverism EP is a true stroke of luck for people who are sick of the usual rock releases. Let the action begin. The tracks can be bought on iTunes and on Amazon. (-taken form the band's press release)
Official site
Buy
Posted by MeTSam at 8:39 PM