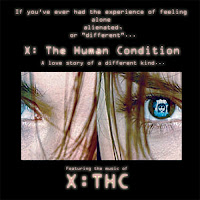 We do not offer a download link since you can buy the album from the band's site for as much as you want!!

So, finally, I got the CD in the mail! I listened to it and liked it a lot! Then I ripped it so I could put it in my MP3 collection, in my iPod and so on. But as soon as the CD was ripped I realized that I didn't know where to put it in my collection!! What kind of music is X:THC playing? Is it Trip Hop? Is it Dark Rock? Is it Ambient?  Chill Out maybe?
Yeap, you got it! X:THC have managed to melt various genres of music into a big music cauldron! From the dark spoken introduction in "Hide" to the jazzy "Tag, You're it" you have the impression that there is more than one band performing on this wonderfull CD. And yet, it remains coherent the whole time, kind of being a concept album.
So, if you like Massive Attack, Nine Inch Nails and Chill Out music, then I bet that you re going to love this album!


X: THC’s Michael Nova is an existential explorer. A powerful performer, composer, filmmaker and producer, Michael is releasing his multimedia music and film project, X: The Human Condition, after over a decade of, at times, seemingly insurmountable challenges, countered by an innate creative perseverance. The project came about as many artistic ventures do – as a means of catharsis at a hard time in Michael’s life. However, hard times got harder, and when Michael became severely ill and almost went blind, X: The Human Condition seemed doomed. After completely revitalizing his way of life, Michael experienced a miraculous recovery, which in turn drove him to complete his magnum opus. Now he brings the work to the world, to inspire others to make a positive change as he did, and make a difference.
Synthesizing music, film, and an unforgettable live experience, X: THC is evolving and redefining how a live show is presented and experienced within the model of the music industry.
The central themes of the show are the universal human sentiments of isolation, loneliness, and detachment. By integrating different live media forms through “synesthesia” (cross-sensory experience), X: THC extends their own experiences to the audience, including them and affirming the fact that each of us is not alone.
The immersive, live concert performance is accompanied by Michael’s original film, X: The Human Condition, whose wistful and mysterious imagery creates an utterly unique and uplifting experience. Citing Tim Burton, Michel Gondry, Jean Cocteau, and The Brothers Grimm as major influences, Michael’s visual companion to the performance is a surrealistic trip inside the human subconscious.
In order to affect concrete change in others’ lives, X: THC has partnered with several charities dedicated to helping others who feel alone, alienated or "different". A portion of proceeds from ticket and album sales of X: The Human Condition will go to aid this vast community of people overcoming difficulties.
Official site
Buy (store)
Posted by MeTSam at 12:02 AM