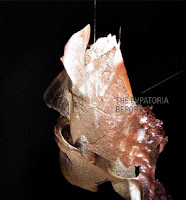 The Evpatoria Report was born in January 2002 and the band consists of two guitars, a bass, drums, a violin and a keyboard. The band offers an instrumental rock combining serenity, power and intensity. In order to enrich some of its compositions, The Evpatoria Report is willing to collaborate with other musicians, as it was the case with Reverse Engineering, the Orchestra of Ribaupierre or the Union Choral society of Vevey.
The band’s activity can be summarized through the release of its first EP (2003), followed by its first album "Golevka" (2005) as well as through life performances, in particular with Mono (2004), Calexico (2004) and Red Sparowes (2006). The Evpatoria Report currently works on a new album and maintains a keen interest for all sort of project, notably that of a soundtrack.
Official site
MySpace
Buy it Sold out