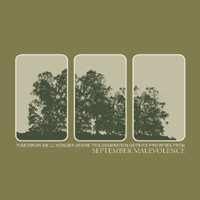 They've been called the Swedish Explosions in the Sky, and you can only take such a comparison as flattery. September Malevolence leads a booming Swedish instrumental scene with moody, slightly off-beat post-rock that has a perfect insight into the quiet/loud approach that has dominated the genre over the past few years. Top-notch songwriting sets Tomorrow We'll Wonder... apart from the pack, and it's a skill like that which is an indicator that this band is not a flash in the pan.
Tomorrow We'll Wonder... gets darker than one would expect, but this is complemented well by a gloomy atmosphere that looms over the album. While the dark clouds are briefly cast away throughout the course of the album, it's ultimately a losing battle as the intent of the band becomes clear by the album's conclusion. And with that September Malevolence leaves us craving more.

Official site
MySpace
Buy it
Posted by JaM at 12:20 PM