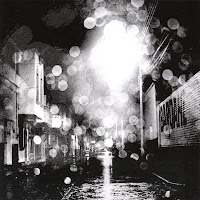 A much debated topic in the underground music community is the overuse of strings of adjectives. 'Post-Emo-Metalcore', 'Neo-Folk-tronica', 'New-Wave-Psychedelic-Electro-Ethnic-Industrial', it goes on. It would make sense to assume that the reason for this is to try to convey a vague sense of what the album sound like, so that other people who may not be familiar with the genre have an idea of what to expect before listening. While this can sometimes work in a very amorphous way, it will never get to the true feeling behind the music itself.

In the case of Asbestoscape, this could never be more true. Part post-rock, part electronic, part drone, part metal... I could go on, but despite the proven theory that too many elements can sometimes be chaotic and detrimental, this works and it works quite well. This self-titled debut has a charm to it that grows with every listen, not too quickly and not without restraint, but it definitely does. The start of the album begins with a simple Isis-esque repeated guitar riff, but it slowly morphs into the next phases of the song. This pattern repeats itself through each piece, and through the boundaries between them relatively seamlessly, affecting blended theme changes.

After a few tracks, a distant reverb-soaked piano starts in "And So the Story Goes..." which slightly judders the well-calculated flow which has so far been established. This is resolved shortly afterwards, however, by some well-placed synthesizers and the introduction of the ominous sounding rhythm section.

While this is definitely a competent collection of tracks, and nicely formed into a cohesive album, it is not without its faults. "Faults" seems a very strong word here, but when several small niggling features present themselves together and are exacerbated by the repetitive nature inherent in this type of music, they become more noticeable. Because the first half of the album is so brooding, making room to slowly build and develop to imply tension and coming change, it becomes slightly disappointing when it doesn’t reach its expected peak. Asbestoscape actually remove some of the more climactic elements. The electronic drums, for example, give a sense of rushed melody against the tense deliberate guitar and pounce upon the listener after a minute or so of tuned feedback and rumbling bass. It is these rarely exploited juxtapositions that give the droning pieces their intrigue, and it seems a strange choice to leave out.

Miscalculation on the artists part is never a reason to dislike an album, but it does detract from the experience somewhat. Then again, after listening to the vast majority of the album, you tend to forget its failings. The challenge here is always going to be keeping the listeners attention while retaining the feeling associated with more lethargic metal. Asbestoscape manage to do this without much effort for the most part, and with only minor shortcomings in the rest. Indescribable, but definitely not nondescript. -Barry Smethurst (thesilentballet.com)