This Is Your Captain Speaking - Storyboard 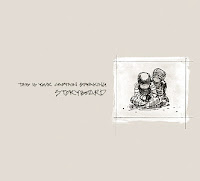 Describing a band like This Is Your Captain Speaking can be very difficult, especially when you try to avoid overused terms like "post-rock" or "ambient shoegaze", but I'd rather avoid using those descriptions for this Melbourne, Australia based instrumental band. And not because TIYCS doesn't play post-rock/ambient shoegaze, but rather because their music just doesn't stop there. Storyboard is the bands debut full-length, and was originally released by the band itself. After selling out of the original pressing, UK based Resonant Label reissued this fine masterpiece. The fact that this record is a debut is hard to believe, because the trio effortlessly plays with (equal to or more) passion than Godspeed You Black Emperor, they have just as much climatic emotion as Mogwai, and they easily rival Explosions In the Sky with their epic, cinematic sweepings. And yeah, all this on a 7 song, 66 minute debut! The record title (Storyboard) is very telling of the bands ability to communicate through mood, tone, and pace, and while there are no vocals to speak of, Storyboard speaks to me in ways only the most powerful post-rock music can. "Gathering Pieces" is an 18 minute introduction that does anything but lull me to sleep, despite its peaceful transitions. A typewriter sets off the rhythm of "6pm", a song that relies on soft drones and subtle delays. Think Disappear Here by Yellow6 (minus the electronics) and you'd be close. "A Wave To Bridget Fondly" also extends the 10 minute mark, but TIYCS displays their unique ability to transition and crescendo as if they're floating on air. More traditional guitar tones emerge on "Weathered", allowing the listener to hear a band that doesn't hide behind a bag of tricks. The intensity builds in "Lift" as guitars seem to crash into each other and the wall-of-sound atmosphere rages with dynamic passion. This is something I hear numerous times throughout Storyboard. At the risk of sounding cliché, there is a passion in these songs that is sooo evident in the recording. I'm almost left with an emotional high by the time the CD is over. Guitars dance around the melody and rhythm of "Henry & Maximus". It's the most playful of the bunch, and gives you the sense that while TIYCS takes their craft seriously, there is still a light-hearted air to their craftsmanship. Epic album closer "Angels" makes use of chimes, mandolin, and metallophone to help create a heavenly soundscape of whimsical, unearthly melody. Resonant packaged this glorious transient album in a digipak case, and the band enclosed a 12 page booklet with Storyboard sketches. This album is a wonderful experience end to end. For fans of Mogwai, Sigur Ros, GYBE, EITS, and Yellow6. An absolute MUST HAVE! (-review from The Black & White Mag (UK))

I recently downloaded this, but there seems to be something wrong with the first MP3 file "Gathering Pieces." It isn't being recognized as an audio file..

It is recognized but there is something wrong with it, indeed!
Anyway, I m reuploading a "fixed" version of the album, it ll be up anytime now!
Cheers!

Thanks much, I appreciate all the work you do here!