destroyalldreamers - Wish I Was All Flames 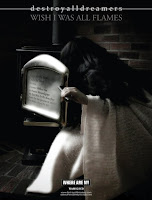 Artist: destroyalldreamers
Album: Wish I Was All Flames
Label: Where Are My Records
Year: 2007

I've never been too fond of this subset of instrumental music often referred to as shoegaze. That is not to say I don't enjoy it, because I do, but I do stop short of calling myself a 'fan' due to my lack of experience in the genre. I have listened to several years of shoegazing bands develop, but never listened intently enough to form any kind of lasting impression. To some extent, that is slightly the point, I suppose. The sheer aesthetics inherent in this type of music dissuade you from listening intently by making the immediately noticeable exterior satisfying enough for most people. This is even how i felt upon listening to Destroyalldreamers' first effort A Coeur Leger Sommeil Sanglant. Though it was a confident collection of songs, it lacked a certain addictive quality that, thankfully Wish I Was All Flames exhibits handsomely.

Though this album has all the trademark sounds and clichés rife in the shoegaze genre, it somehow manages to display them with such panache and skill that listening further never becomes difficult. The hardest part of the whole experience is reminding yourself that you have things to do, and that sitting around all day listening to one album develop on each listen is not only quite counter-productive, but it's also a bit unnecessary. Such is the "learning curve" on this release is that it's cleverly applied so you can not listen for days and then pick the headphones and be right back where you were when you left off.

Tracks like "Automne," reminiscent of Bowery Electric, are typical of the smooth quality of many tracks on this collection, beginning with a simple bass-line then lifted almost instantly with a phased, panned shimmering guitar chord-drone. Most of the tracks develop this way, yet it doesn't come off as boring, or samey. More as a way to have a thread of continuity throughout the album, and it works very well. The album finishes on the exceptional trio of "Her Brother Played the Riot," which are a lot more ambient and atmospheric. All of these pieces are beautifully continuous and act as a sort of denouement from the rest of the collection, leaving the listener in a trance-like state.

The only discernible problem I have with this release is that, at times, it feels like the middle sections of the songs could in fact be interchangeable. While that is no bad thing per-se, it does tend to make things have less of an impact than if the sections were clear-cut, but then herein lies a lot of the appeal. As it is now, Wish I Was All Flames is an incredibly competent and desirable collection, and it faulters in very few places -- a golden moment in shoegazing, and a fantastic return for Destroyalldreamers.
-by Barry Smethurst (thesilentballet.com)