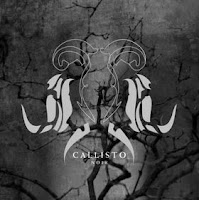 Callisto, Finland's gift to the progressive metal scene. Their type of calm, atmospheric and melodic metal has been often compared to the likes of Isis, Mastodon, Neurosis and Cult Of Luna. Ultimately the band combines the sluggish elements of doom metal with the harsh ingredients of hardcore. In 2001, Callisto self-released their debut single "Dying Desire". Their debut Fullsteam Records release was their 2003 MCD "Ordeal of the Century". In 2004 the band released their debut full-length album "True Nature Unfolds", which was globally reissued in 2005 through Earache Records. Through the new label, the band got their much needed word-wide exposure. "True Nature Unfolds" really stabilized the style of the band and now, in 2006 the band has returned with a new full-length album, "Noir".

The album kicks off with "Wormwood", a fine example of what this band is capable of; beautiful symbiosis between atmospheric guitar melodies and harsh growling vocals. As an refreshing change, the band introduces some brass-instruments on this track. The track-lengths on this album vary from five to almost ten minutes; these epic pieces of art are really something you need to go deep into, before really understanding them completely. "Backwoods" is a calm and beautiful, barely a minute-long interlude. "Pathos" begins with nice flute-like synth sounds and eventually explodes with the harsh growling vocals and heavier guitars. With "Noir", the band has evolved into a more artsy direction. A fine example of this is the fact that the band focuses more on the instruments rather than on vocals. It is very rare that a Finnish band succeeds in creating something as original as Callisto.

Simply put, "Noir" is a true chill out album for every agitated hardcore-head out there. If you enjoy beautiful guitar melodies with growling vocals, then this thing is made for you. "Noir" was released on May 10th through Fullsteam Records.
-Teemu Hakala(hardcoresounds.net)