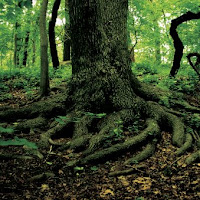 First impressions are everything they say. Bossk supplies an interesting piece of music for their own. First, you must realize that this EP has only two songs, each more than fifteen minutes in length, and are titled in a most clever fashion “I” and “II”. Obviously, these will be meandering sorts of songs, and ultimately its important to realize not only where the song is headed, but where it has been as well.

The first song “I” is 16:08 in length, and starts in a fashion those familiar with Godspeed You, Black Emperor! will be familiar with. Droning noises appear first, painting a rather somber soundscape. Next the drums appear, softly creeping in with the cymbal and then guitar with distortion builds into the meat of the endeavor. This all occurs at a pace quicker than that of GYBE!, with the true heart of the song revealed much sooner.

The song overall feels like a slow motion liftoff, each section firing in stages. After about four minutes of build, the song really kicks in and begins to meander a bit. It quickly comes back, stronger and more intense. Finally, the power chords begin and the bass and drums begin to get heavy. The character from before is gone, and now it chugs along. At some points, this heaviness feels a bit unwelcome, as if it were forced upon the listener. Some may enjoy such a change, but I found it to be a bit abrupt and overall a bit forceful. It is important to note the instrumentation remains solid throughout, and the transitions are smooth. However, unlike some of the stronger presences present in the postrock world (i.e. Explosions in the Sky), the overall build and structure of the song seem to trail off as one gets deeper into the song. Eventually “I” comes full circle, ending with a familiar yet strange arrangement similar to something previously heard in the song.

“II” is decidedly heavier than “I”. It starts with some curious notes on the guitar, leading into accompanying bass and a second guitar. More importantly, the song seems to have a more clear direction than the first, and lays its groundwork well. What is so brilliant about it is the result of this soothing intro. The segue into the rest of the piece is both subtle and with purpose. Unlike “I”, the heavier sections of the song are most welcome, perhaps because the music leading up to it prepared the listener for the menace that lay ahead. The riffs are deliberate and sound not unlike a slower metal band. About 2/3s through the song, a growl appears. The words are indistinct. I am not sure whether or not they actually matter. In my eyes, they serve to further create a sense of atmosphere, almost evoking a sense of dread. Ultimately, the EP ends the way it began, with droning noises appearing and instruments slowly falling from the scope of sound.

While I do enjoy longer songs, these tend to push the feasible limit of length. The songs are interesting, but little grabbed me except for the middle of “II” forward. In the end, I got what I usually get out of good EPs: the band in question has a lot of potential and are moving in an promising direction, but it’s missing something essential. Bossk is no doubt good and as they mature they may deliver with something truly amazing. But for now, they may get lost amongst the other fish in the postrock ocean. - by Travis (invisionfree.com)