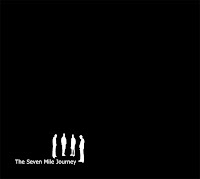 Operating under the post-rock banner, The Seven Mile Journey's The Metamorphosis Project offers an hour of sparse and atmospheric soundscapes. It is the group's second release for Denmark's Fonogram Agency, and is released in the United States on Pumpkin Seeds in the Sand. The design is minimal yet eye-catching, with a white logo stamped in the corner of a glossy black digipak. Varying only in color, the art is identical to their previous releases. It's almost as if the band wants the music to speak for itself...

Opening track "Theme for the Elthenbury Massacre" offers little in terms of variety, using droning guitars that maintain a bleak aura. It's similar to many Explosions in the Sky songs before they crescendo and, frankly, that monotony makes it rather boring; it's the auditory equivalent of driving through the plains for hours on end. You might come across an occasional hill or curve, but it's basically a lot of the same thing. After fifteen minutes and two tracks, the album starts to pick up.

On "Identity Journals (Anonymous)," the group incorporates more energy, varying the tempo and offering a melody to counter the record's dreary start. For my tastes the melody is essential. Despite any traditionalist arguments one might make for the post-rock genre, the hint of catchiness keeps me interested. The guitars are utilized to drive a melody that overlays the earlier drone - shifting the tone from banal to foreboding and eventually optimistic. It's effective without being flashy. The next two songs incorporate a mild crescendo, subtler than their aforementioned Austin contemporaries, with a melody weaving in between the atmospheric, tone-setting drone and an emotional rise. After approximately twenty minutes of teetering on catchiness, the band briefly transitions between the earlier abyss and back to a gloomy crescendo in tune with the middle of the record on the closing "Purification - The Journey Transcriptions."

The Metamorphosis Project is parallel in structure to a screenplay: the six tracks can be broken into two-song "acts" conveying an emotional setup, change of outlook, and climax. The rise and fall are alternately intriguing, mildly catchy, and climatic. It's a solid album with emotional heights but, unfortunately, the record just takes too long to get going before its all-too-brief peak. It's an epic crescendo structure without enough epic. The record is solid but unexceptional. I would not recommend it for anything more than atmospheric background or enthusiasts of the genre.-Loren (scenepointblank.com)

This is a fucking damn good release!! FIVE STARS.