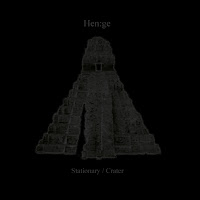 Hen:ge is a three men group from Regensburg, Germany. Björn Schmitz and Tobias Zenger (Silent Duel) who both play in the band fire walk with me! and are members in the close nerd collective had the idea of moving some steps back to explore some more experimental droning and slower soundscapes. The original idea was making music just for personal catharsis. At that time they met Matthias Menath who had also the idea of creating hush. Finally they invested two hours for recording the Stationary / Crater EP.

Hen:ge's music can be described as movements of slow rhythms surrounded by hounting walls of guitar and explosive escapes into the static or even the epic. It shows a landscape of sound in which the atmosphere is mostly dark, lost and less plastic than vivid.

A lot which is neither worthy to live nor to die for. Proud men built it all up with their own perspiration. Now the people don't have the right any more to just close their eyes and let the tyrants do whatever they like. It's time for them to unite. The way to the enclosure must be paved. Don't be that foolish to confide in anyone blindly. No tyrants, no tears, not even a dust particle will outlive our nature. But on the horizon beyond the majestic mountains of dust beyond our own lies lays the visage of our own nightmares. The last bridge between desperation and aspiration. Deep under the sprawled ruins of ancient times, under the aspirations which were buried there in older days lurks arcane animosity which will resist the devastation. It draws the pain of the world to concentrate it like a magnet. Just like children they will grimly judge one below the other without any meaning of right and wrong till they recognize that in a final step the nature is above all things and everything they prayed for and wanted to die for... the lot is turning and... ...is now just a scar in the earth.