Followed By Ghosts - The Entire City Was Silent 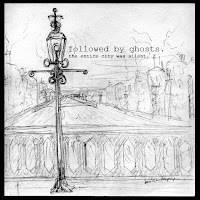 
I am a firm believer that no great art was borne of happiness, I don’t how or why I came to this conclusion – it’s just something I feel. Which leads me to quote something once said by some mug in Hamlet - "When sorrows come, they come not single spies, but in battalions". Followed By Ghosts from Waverly, Iowa have encapsulated the sound of that battalion approaching from over a grassy knoll, with a skyline breached by banners and spearheads.
They come in the name of the fallen, with a force ten fold, kicking in the door of heaven. Not as musicians, but as disciples of something otherworldly sent to initiate the masses, dancing on the very grave of life itself before it’s even dead. Their latest endeavor, The Entire City Was Silent, is a behemoth, a leviathan of fuzz and drizzled feedback, and majestic like slow motion tape-breaker footage from a city marathon, the Angel Falls, or a battlefield sky victorious. It swells with emotion in places with a musical scope that ranges from the quietly subtle to bombastic bravado, with a pervading taste of sweet melancholy ever-present, like pride and nobility in the face of impending doom. It is a soundtrack for when underdogs become kings, anthems for the lost, saves-the-day-gets-the-girl music, and songs for watching comets to; the list is endless but all within it encompass that surging blissful feeling of hope, the physician of all misery.
To be perfectly honest, I don’t know where to start as there are so many endearing attributes to highlight. Initially lulled into a false sense of security by “Hymn Of Twilight,” I’m rendered speechless by “A Mirthful Experience” with distortion like Teslas’ earthquake machine. It freezes my heart like liquid nitrogen and smashes it into a million crystalline pieces. Clocking in at over nine minutes, “Clear Blue Sky” offers a reprieve of sorts until a sense of urgency kicks in. A paroxysm of emotion ensues in a slowly building crescendo which peaks with a ferociousness that could tear the very fabric of reality itself. Regardless of its gargantuan timescale, it’s by no means boring and probably one of the best tracks on the album. It breaks at the five minute mark in what initially sounds like a solitary E-Bowed guitar that is hauntingly beautiful and gives the piece a whole new dimension and direction. A fixed fulcrum from which the album revolves around – impeccably consistent and completely breathtaking stuff. Behold, the Illuminati.
Each track bears its own idiosyncratic qualities and character, as if obsessed over like a musical Frankenstein which has slowly been brought to life in accordance to the prophecies. “City Of Noise” is the slightly introspective twin of “Clear Blue Sky,” also swallowing whole another nine minutes but leaves us yearning more. Time appears unrestrictive with no detail spared from the brief to the seemingly endless and epic. The awkward, yet captivating piano of “A New Dawn” gives way to tremulous guitar, like the first shimmering rays of light. There’s a sense of something growing or coming to life – a sense of becoming culminating with delicious feedback and fuzz that heralds the climax. A fitting, piano-centric closer that leaves a sweet aftertaste and promises the advent of amazing things is found within “The Entire City Was Silent.” Falling somewhere between 65daysofstatic’s “Radio Protector” & “Furnace” by Troubles, it incites a desire within me to start from the top and play everything right through once more for posterity. If FBG maintain this momentum a few cities will fall silent to there resounding knell I’ll wager – I for one will answer the call.
A maturity exists that belies their collective experience, with an amazing sense of individual awareness within the band – never overstepping or overcrowding each other in sound. They allow each the necessary space to shine, and shine they do, like a carbon arc searchlight. Symbiotic guitars weave smoothly executed melodies, metallic shimmerings that swell to blistering crescendos. Littered with start-stop syncopation and percussion that marches into the ether, FBG is somewhat reminiscent to they whose name I dare not speak in these parts, you know who I'm talking about. With masterful instrumental pieces of oscillating fretwork and crisp percussion, The Entire City Fell Silent is an intricate and transcendental collection of music that is as rare as a Dodo sighting.
This is majestic post-rock, brooding, apocalyptic, and yet often delicate, peppered with subtle changes and melodic nuances that steal the very breath. The album title itself suggests imagery of a populous place lain to waste by some fantastical force that dwarfs Hiroshima, or a burning cross perhaps suspended in an anthracite sky raining tongues of fire on a day of final judgment. Everything works cohesively, songs titles, artwork, band name and musicianship. Imaginative, inventive, ambitious and all beautifully interweaved into a Technicolor soundscape. Like a moth to a lightbulb, I’m suspended in the blinding brilliance - trance-like, a devotee.
I offer a quip pilfered from Hunter S Thompson as a final note - "The music business is a cruel and shallow money trench, a long plastic hallway where thieves and pimps run free, and good men die like dogs" - Blatantly misquoted and molded with reckless abandon, but nonetheless a fitting statement. That these guys are not already signed is an absolute heresy, I feel like setting fire to myself in protest, while sitting cross-legged with my eyes closed. A cracking album, I can't recommend it enough. -by James Crossan (thesilentballet.com)

one of the best posts you've been uploading lately.
thank you.